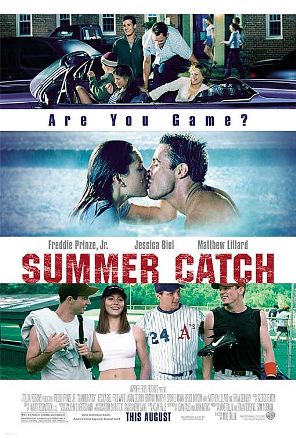 With a crack of the old hickory it’s Burl, here to review a baseball picture! Now, ol’ Burl enjoys baseball, playing it and spectating it both! I’ve never had a particular love of baseball movies though, but I suspect that’s because I haven’t seen very many of the good ones! The Natural, Eight Men Out and even Bull Durham are all on deck, but I’ve yet to watch any of them! (Ha ha, I have seen Fear Strikes Out, though, and of course The Bad News Bears, which is the best of them I think!)
Today’s baseball picture, Summer Catch, is not one of the good ones, I’m sorry to say! It’s a simple baseball romance, featuring a working-class kid who gets his big chance to play for real, his af*air with a rich girl, the girl’s disapproving dad, the goofy guys who make up the rest of the team, the local friends, the blue-collar dad and of course the grumpy coach! It’s all there, present and accounted for, and if you’ve ever seen not just a sports movie, not just a romance, but any movie of any description, you’ll have seen all this before! Ha ha!
You might be wondering why ol’ Burl even took this one off the shelf, much less took the time to watch it! I’m wondering the same, frankly, but one critical factor was that the movie is set on Cape Cod, a fishy-smelling place I’m fond of! I’ve always loved seeing it portrayed on film, which is probably mostly thanks to Jaws and also maybe a bit to Tough Guys Don’t Dance! Anyway, I was hoping for some Cape Cod atmosphere here, some scrubby dunes, half-buried sand fences, clapboard Colonial architecture and so forth! But no, I didn’t get it!
I also enjoy the summerlong microgenre! This refers to a movie which takes place over the course of a whole summer: personal growth, lessons learned, so forth! Summer of ’42 is a summerlong picture; so are Summer Rental, Summer School, One Crazy Summer and Dirty Dancing! Ha ha, and there are plenty more of them too! I got a bit of satisfaction in that department with this movie, so huzzah!
The picture tries to be a comedy, and it has a couple of laughs, but none of them very fulsome! Freddie Prinze Jr. and Matthew “The Descendants” Lillard, who would reteam later for those Scooby-Doo pictures (Fred and Shaggy, respectively) do their best, but only Lilliard has the energy required! Jessica Biel plays the ladyfriend, and I’m afraid I can’t go to bat for her talents, ha ha! There’s a rather stunning lack of chemistry between these two lovers, in fact, and their dumbbell dialogue improves things not a whit!
On the more positive side, there are a few welcome faces in the supporting cast, though they’re largely wasted! Brian “Best Seller” Dennehy plays the grumping, harrumphing coach; Willard himself, Bruce “Lies” Davison, is the rich dad; and Fred Ward, so marvelous in UFOria, is the not-so-rich dad! There are also late-film cameos from Beverly “Vacation” D’Angelo and John C. McGinley, as well as appearances from the likes of Hank Aaron, Ken Griffey Jr. and the Voice of the Red Sox himself, Curt Gowdy! Ha ha!
But none of this can save the movie from being a stinkpile, I’m very sorry to say! There’s a reasonable authenticity to the baseball scenes, but not much bullpen atmosphere beyond that; there’s no spark to the romance, no bite to the drama, no pep to the comedy (fat girl jokes make up its dispiriting centerpiece) and no sense that anyone involved in the picture really believed it was a story that needed to be told (again)! On top of all that it was a disappointment in the Cape Cod department! I give Summer Catch one half of a dumb, pointless audio flashback!
Posted by Burl at 19:41