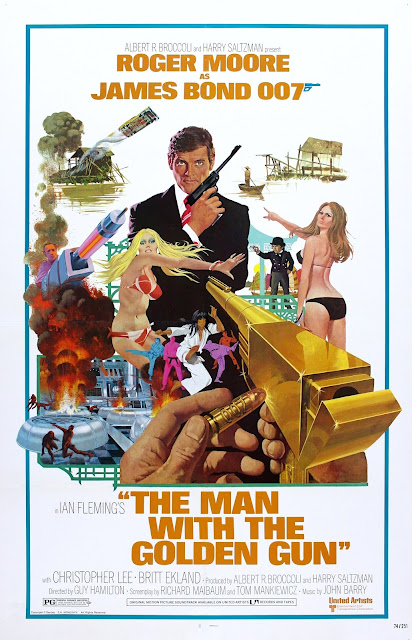 The name is Burl, James Burl! No, ha ha, my name’s just plain Burl, but I am here with a review of another Bond picture for you! It’s another Roger Moore one, in fact, and while I’m a great fan of Roger Moore as a person (so far as I know about him, which isn’t much) and as an actor in pictures like ffolkes, but I’ve always thought he was a terrible Bond! He looked wrong, somehow - he was good-looking, sure, but in the wrong way! There’s not a part of him that’s a brawler!
The plot begins when a golden bullet inscribed with 007 is sent to MI6, but though a threat to his life seems clearly implied and his bosses are concerned, Bond, well used to gold-obsessed villains, is not himself for one moment daunted! He sets out to find the notorious assassin Scaramanga, known for his deadly aim, his golden bullets, his one million dollar fee, and his unbroken record of success! Scaramanga is thankfully played by Christopher Lee from Nothing But the Night, and, lucky are we once again, he has a midget manservant called Nick-Nack played by Hervé Villachaize from Seizure and Forbidden Zone! Ha ha, and these fellows enjoy nothing more than to invite other assassins to their special Chinese island and stick them in a sort of funhouse-shooting gallery they’ve created!
To give the story the global stakes Bond viewers are used to, we get something about some kind of solar energy device, but all that is clearly appended to what the writers hoped would be a thrilling mano-a-mano between two steely-eyed, evenly-matched killers! Except they forgot that Moore was still their Bond, so the steely-eyed bit was out; and they undercut their villain by revealing halfway through the picture that he hadn’t initiated the conflict after all, and had no real interest in a contest with Bond until he suddenly is at the end!
In some ways it’s the sleaziest of the Bond pictures, or at least one of the most risqué! There are lasciviously-shot scenes at a strip club called Bottoms Up, and Benny Hill himself might have written some of the double entendres, ha ha! Even the theme song, sung by Lulu, contains more leering innuendo than usual! It’s more sexist, too, with an inept and bumbling British Intelligence agent named Mary Goodnight, played by Britt Ekland from Endless Night and Fraternity Vacation, forever being kidnapped and pressing the wrong buttons with her bikini-clad bum! Maud Adams, who we know from The Christian Licorice Store, and who tangled with Bond again almost a decade later in Octopussy, at least seems a little more intelligent, and for this she is repeatedly raped by Scaramanga, and later dismissively killed by him!
To make matters worse, Clifton James from Juggernaut shows up playing the same Roscoe P. Coltrane-type he was in Live and Let Die! (James is a good actor; it’s the character who’s intolerable!) The action is set in China and Thailand, so this baccy-chawing cracker ought to have been the last person we had to worry about, ha ha! He’s involved in one of the greatest stunts in the entire Bond series, the corkscrew jump, which the filmmakers shot blandly, and to which they idiotically added a slide whistle sound effect!
It’s all pretty terrible! There’s not much action and precious little style, and for Guy Hamilton, usually one of the more reliable Bond directors, it represents a calamitous drop in quality from the heights of Goldfinger! On the other hand there are some lovely locations, some decent trick effects, and Lee does his best with the character he was given! None of this is enough to save it, I’m afraid, so I give The Man with the Golden Gun only one fake nipple!