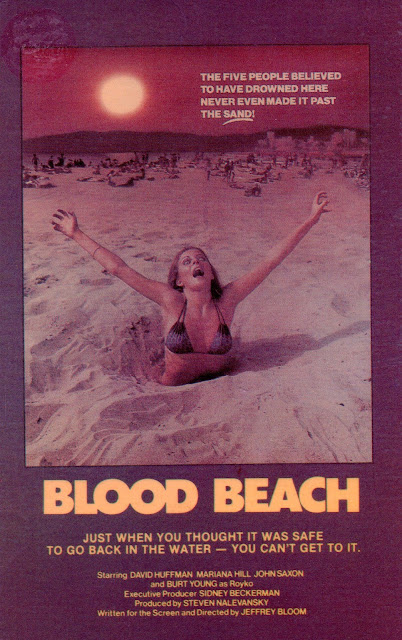 Ha ha, hi, it’s Burl! Way back in the summer of 1982, when ol’ Burl was just a very young lad, I went with a friend and his dad to their beachfront cabin, and, looking at the local newspaper, we noticed that just up the beach in a nearby town, the local theatre was playing Blood Beach! Ha ha, that sounded pretty great to us, so we set off, walking along the sand to get to this town we assumed was right around the corner! Unfortunately it was a lot farther away than we bargained for, so we never even made it there and never got to see Blood Beach! Ha ha, maybe it was for the best, since my friend was a bit wimpier than me when it came to horror movies and he would certainly have balked pitifully at walking along the beach to get back home!

I eventually saw the movie on video, of course, and then I watched it again just recently! It’s set on the Santa Monica beach in L.A., the same area Fletch was investigating in the movie of the same name! It seems that people are being sucked down into the sand by a something-or-other that somehow travels beneath the beach and munches on people whenever it gets a mind to! The first victim is an older lady, the friend and neighbor to the movie’s nominal hero, Harry, who works for the beach patrol just like Hasselhoff did in Baywatch! Harry soon gets sucked into the mystery as surely as the various victims – a teenage girl, a would-be rapist, a metal-detector geek in madras shorts, Harry’s own girlfriend, his monkeyfaced colleague on the beach patrol, and so on – get sucked into the sand!

Read a few reviews of this movie and you’ll soon discover it’s not very well liked! It’s hard to argue with the reasoning: the movie is slow, there’s way more beach than blood (though we do see some heads and other assorted body parts later on), and there’s hardly any monster action to speak of! In fact, we barely get to see the thing, and when we do, it doesn’t do anything but sit there and roar a bit! (It’s often described as looking like a huge artichoke, but I’d describe it more as a big liver slab with a pretty flower for a mouth!) On top of all this disappointment, there’s no climax to speak of in the film – nobody fights the creature or even ventures into its lair while it’s around!

I dispute none of these charges, and yet I still harbor a fondness for Blood Beach that I’ll have a hard time explaining! I like the beachfront atmosphere the movie provides – ha ha, I’ve always kind of wanted to live in a beach house! I like the score, sort of! I like the unhurried, beach bum pace of the thing! And I like the actors, from the would-be hero (who just stands around for the last act, not doing much of anything) to the cops played by John Saxon and the two Youngs, Otis and Burt! Saxon is his usual non-nonsense self (he’s sort of the same character he was in Black Christmas, but if he got a promotion and became surlier); Otis Young, who you might recall from The Last Detail, plays his character as upright and intelligent; and Burt Young, the nasty dad in Amityville II, is crude and uncouth, always talking about Chicago and how horrible the beach is, and the “American Go-To-Hell Nazi Party,” but still manages to be somewhat likable! Burt’s presence in the role of Royko (Chicago reference, ha ha!) is sort of mystifying until the end, when he commits an act that not only concludes the picture, but sets us up for the sequel that never came!

The beachy atmosphere reminds me a bit of the movie Dead & Buried, which has the same fog-filter-heavy cinematography because it was shot by the same guy, Steven “Someone to Watch Over Me” Poster! It also reminds me a bit of a Ray Bradbury book called Death is a Lonely Business! So if you like that kind of thing and are looking for a good movie to help you wind your summer down, check out Blood Beach! I give it two roaring flowermouths!
Posted by Burl at 15:37