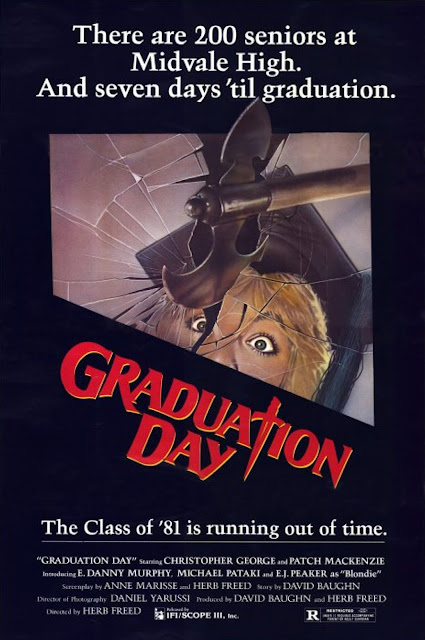 Hi, and how’s that mortarboard? Ha ha, it’s me, Burl, here to celebrate Graduation Day with you! Well, not celebrate it exactly - more like tell you what a cantaloupe it is! But there are a few things to celebrate in this mid-period slasher picture too!
It’s the modern tale of a hard-nosed track and field coach (played by Christopher George from Mortuary and Grizzly and City of the Living Dead, of course!) and his team of teen runabouts, many of whom appear to be well past their teen years! In fact there was a mild but inconsequential mist of confusion laid over the whole movie for me: was this a high school with a spectacularly well-financed athletics program? Or was it some kind of elite sports college? I suppose it was the former, which is why a sold half-hour in the late middle of the picture seems to be scenes of the principal, Michael Pataki from The Bat People, fielding calls from worried parents wondering why their kids haven’t come home!
Turns out it’s because they’ve been murdered! It all starts when a young track star drops dead after finishing a thirty-second run! (How long are you supposed to be able to run in thirty seconds, I wonder? A quarter-mile? Ha ha, maybe Roger Bannister could do that, but not ol’ Burl!) Soon an unknown killer is clicking his stopwatch and performing a series of serious pokings on the rest of the team! Who is the killer? Why, is it the person you suspected the very first time they were shown on the screen, but rejected as a potential culprit for being too obvious? Ha ha, yes it is!
Now, it has to be said: there’s an awful lot of space between these pokings! There’s some unnecessary family drama when the dead girl’s sister comes back home from a navy tour in Guam and argues with her stepfather; there’s a ton of school office business, like those phone calls and the principal being a bad boss to his secretary; there are plenty of sports, of course, enough so that you might believe you’ve turned on Fatal Games by accident; and there’s the lounge lizard music teacher and further material unrelated to pokings; and I haven’t even mentioned the gangster rock, ha ha!
I’m not one who automatically complains about the space between murders in a slasher film - often those are my favourite parts; but not here! There’s just a feeling of mild disorganization that seems to overlay the whole enterprise from the script up, exemplified in details like the ostensible heroine dropping out of the picture for a huge chunk in the middle, until she’s needed again for the climax!
But thankfully things get a little peppier in the last act! I’m glad to report, too, that there are some familiar faces salted into the cast, like Virgil Frye from Garden of the Dead and Hot Moves, Linnea Quigley from Witchtrap and Innocent Blood, and even Vanna White from the spinning wheel show! There are some honest-to-goodness Special Makeup Effects (a rapier through the neck, a decapitation, a slit throat), though not many of them, and they are not well shot! And then there’s the gangster rock, howled by a good-time rock combo called Felony, which they certainly may have committed here! Ha ha, what must be the super extended dancefloor remix of their gangster rock seems to go on for ten minutes, keeping company with some disco rollerskating and a couple of pokings that are meanwhile taking place in the same stretch of woodsy path the students seem to spend most of their time on, walking or jogging up and down it, making out in the bushes beside it, or just plain killing whoever happens along it! Ha ha, the gangster ro-o-o-o-ck!
There are a couple of novelty theme deaths too, like the pole-vault punji stick gag or the old spear-in-the-football trick! There’s not much suspense and almost no fright, though a couple of moments at the end try to make up for that! Altogether it’s hardly one of the better early-80s maniac pictures, but it’s a sort of exemplar of this mediocre strata of the genre, and that has to count for something! I give Graduation Day one and a half white-guy breakdancers!
Posted by Burl at 00:40