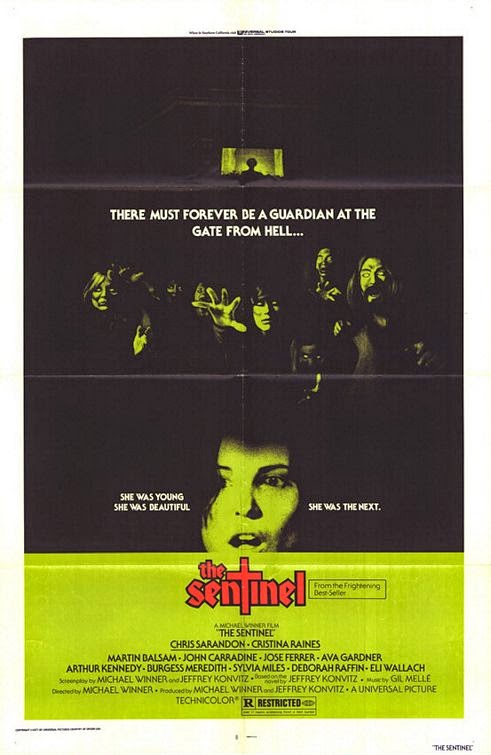 Boogeda-boogeda, it’s Burl! Ha ha, I’m here to review one of those 1970s devil thrillers, and this is no The Exorcist or The Omen or The Legacy or even The Car – it’s the notorious shockshow known as The Sentinel!
Ha ha, the very first thing to mention about this picture is the extraordinary cast! By garr, you’ve got to see it to believe it! It seems everybody wanted to stop by the set of The Sentinel and just make an appearance for the sake of it, and maybe to get a free lunch! The second thing to know is that it was directed by Michael “Death Wish II” Winner, for whom it seems unsuited!
The picture involves supermodel of the world Alison (played by Christina Raines, years before she would go out for smokes in Nightmares), who is not quite ready to settle down with mustachioed pre-vampire Chris “Fright Night” Sarandon, and so spends the first third of the movie apartment hunting! We see several spectacular New York apartments, and learn the outrageous rents they’re asking – sometimes six hundred dollars a month or more for a spacious midtown Manhattan flat! Ha ha, scared yet? Meanwhile Alison starts pitching fits at work, which doesn’t amuse photographer Jeff “Into the Night” Goldblum or commercial director Jerry “F/X” Orbach!
Eventually she finds a place in Brooklyn, but on the river and with a great view of Manhattan! It’s huge and only four hundred a month, but the catch is that it’s the gateway to hell! Ha ha, more immediately, the problem is weird neighbours, like a pussycat-stroking Burgess “The Manitou” Meredith, or elderly blind priest John "Sunset Cove" Carradine or leotard lesbians Sylvia “The Funhouse” Miles and Beverly “Slow Burn” D’Angelo, who only fondle one another and behave as I suppose the people who made this movie expect lesbian ladies to behave!
José Ferrer from Dune is, of course, The Monsignor, and Arthur Kennedy plays his priest-in-chief! They know what’s going on, as does sinister real estate agent Ava Gardner, but when Raines is struck by a vision of her cake-eating reprobate of a father who is dead, ha ha, but who appears prowling around her apartment in grey-skinned dishabille, and whom she tries to send back to the grave at the point of a sharp kitchen knife! Soon detectives Eli “Circle of Iron” Wallach and McBain himself, Christopher Walken, are on the case, and ha ha, somebody should have given these two their own buddy cop show!
Sarandon, who has his own secrets, is trying to figure out what’s going on, and he enlists the help of such figures as Martin “Spaghetti Western” Balsam and William “Christmas Vacation” Hickey! Of course it all climaxes with what this poorly-directed and ugly-looking movie is most famous for: the parade of real-life freaks who purport to be denizens of hell! Ha ha, I suppose they might have needed the job, but it surely has a different feel than Freaks, where the unusual people have personalities and agency! Here they’re merely meant to be scary and shocking, like the lesbians!
At the end, after Tom Berenger from Last Rites shows up and we see that Alison has taken Carradine’s place, you might think to yourself “What did I just watch?” It’s a crude and loony movie, and the script is terrible, but it has a few compelling ideas, one scary scene, and some great makeup from the late, lamented wizard Dick “Spasms” Smith! It also occasionally manages an eerie atmosphere, despite doing almost everything wrong in attempting to generate same! Ha ha! Still, I’ll give The Sentinel one and a half mogey leotards! It’s no good, but oh, that cast! Ha ha!
Posted by Burl at 22:50