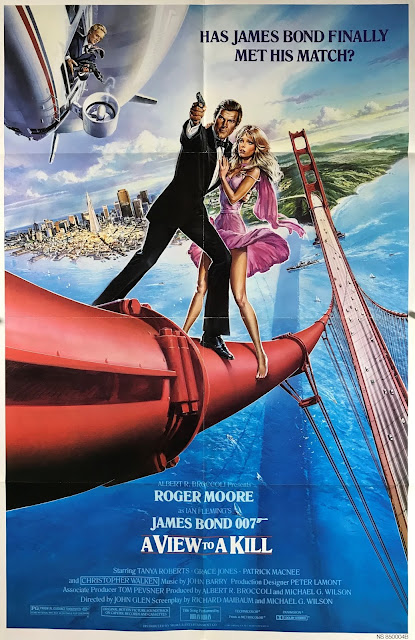 Double-0 Burl, reporting for duty! Ha ha, yes, it’s yet another Bond picture today, and indeed yet another Roger Moore Bond picture, and here it was his last: A View to a Kill! And I’m going to say it straight up without any coy talk or beating about the bush: this, friends, is as bad as the famous action franchise ever got! Perhaps the worst thing is that whenever Bond is attacked or is otherwise in peril, he emits a terrified howl entirely unbecoming of a double-naught spy! The movie is leering, insipid and cartoonish in all the worst ways, with the glossy production values here seeming more superficial than ever before or since, and with a star well past his best before date! Ha ha, it’s like Cannon Films made a Bond picture!
We begin with Moore, or rather his stunt double, skiing around on glaciers and down radical slopes, at times on a proto-snowboard and accompanied by “Surfin’ U.S.A.” instead of the John Barry action music! This is truly the depths of nonsensery, a return to the same imbecilic frame of mind that brought us the slide whistle in The Man With the Golden Gun! The ski stunts are impressive, but so obviously the work of doubles not just for Moore, but for the entire crew - it was all second unit stuff of course - that it feels like somebody just threaded up a ten minute Mike Marvin or Willy Bogner short completely separate from and incidental to the spy story we’re putatively enjoying!
From here we move to a plot concerning microchips and horse racing, and our bad guy, Max Zorin, is played by a grinning, blond Christopher Walken, the actor whose face is familiar to us from such productions as The Dead Zone and McBain! Grace Jones from Vamp is wasted in the role of Zorin’s assistant, and we eventually discover that the bad man's nefarious plot has something to do with setting off an earthquake to flood Silicon Valley while he rides around in a big blimp with his name on it, laughing! Along the way Bond's friends are constantly being strangled by someone who pops up in the back seat of whatever car they’re driving, and there’s first a dumb taxi chase in Paris and then a completely superfluous San Francisco fire truck chase scene that I used to think was cool because the bright red of the hook-and-ladder truck made me think of the terrific old TV show Emergency! But now it just seems like another one of this elderly Bond’s many unforced errors, riddled with more of those pathetic, panicky howls as he hangs from the truck as Tanya Roberts drives crazily through the streets of the city!
On the other hand, John Barry contributes a particularly good score here, ha ha, and I quite like the Duran Duran theme song, despite nonsensical lyrics like “Night bugs cover me,” and the most abysmal, thuddingly literal title sequence old Maurice Binder ever came up with! Also it was nice to see Patrick Macnee, of The Howling and Sweet Sixteen and of course a fictional spy in his own right, pop up in the mostly comic role of a dapper horse trainer forced to pretend he's an abused valet! In addition there are many of the usual Bond folks, now superannuated, but it’s still a pleasure to see them, and a feeling both melancholy and relieved to remember that it was for several their last go-round! Yes, Moneypenny, I'm looking at you! And there are some familiar faces to spot around the edges of the picture, like Alison Doody (ha ha!) from Indiana Jones and the Last Crusade, and Dolph Lundgren from I Come In Peace!
Well, as you can see I don’t have a lot of love for this picture, but I’ll always have a certain fondness for it, as I do for Octopussy, because, as bad as they both are, I went to see each of them in the theater under pleasant circumstances, with groups of friends on a hot summer’s day! Nevertheless, I can muster only one fishhook butterfly for A View To A Kill! Ha ha!