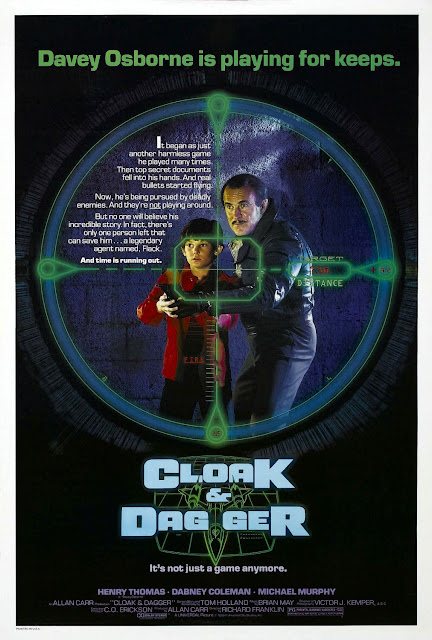 Hi everybody, Burl here, finally! Yes, I’ve been away, but I do mean to keep reviewing movies for you, ha ha! And I have one for you now, a kiddie adventure from the mid-80s called Cloak & Dagger! That’s the one with Henry Thomas, who’s still today, maybe even to his own family, known as The Kid From E.T.; and the picture also features a double helping of Dab! Yes, that’s Dabney Coleman, famed for his role in Dragnet!
The picture is a would-be Hitchcockian adventure retooled for kids, and the premise is that a little nerd boy, Davey Osborne, is so wrapped up in his fantasy world (one part D&D, two parts James Bond) that he has an ever-present imaginary buddy called Jack Flack, who advises him on strategy when things get hairy! Jack Flack is of course played by Dabney Coleman in a beret!
Naturally his widower dad disapproves, and who do you think plays the dad? Why, it’s Dabney again, ha ha! Meanwhile the adventure commences, with the McGuffin being some kind of microchip planted in an Atari cartridge (which everyone except Jack Flack refers to as a “tape” for some reason), disguised of course as the very game with which young Davey is obsessed, which, again of course, is called Cloak & Dagger! (Ha ha, I smell a failed tie-in!) Naturally nobody believes Davey for even a minute, due to his history of fantasy-based storytelling! Davey is pursued by Michael “Manhattan” Murphy and a duo of off-the-rack thugs played by Tim Rossovich from The Ninth Configuration and Eloy Casados from The Best of Times, who are later joined by an old couple, one of whom is, shall we say, ha ha, digitally challenged, through a series of locations no doubt approved by the San Antonio Board of Tourism! Ha ha!
The job of paying fealty to San Antonio done, the ending of the picture becomes a love letter to fathers! Davey finally sees the futility of Jack Flack, and ultimately finds him unnecessary too, since Davey has a real hero living right in the house with him: his dad! Yay, dads! Ha ha, the opening logo says Universal Pictures, but the picture seems more to have been financed by a consortium made up of Atari, the City of San Antonio and the National Council of Average-Guy Dads!
Having the old couple played by pros like John McIntire, from Psycho and Herbie Rides Again, and Jeanette Nolan, from The Manitou, should in theory result in the sort of delightful, eccentric frissons provided by Dame May Whitty in The Lady Vanishes, but somehow it does not! (It does briefly provide the picture with a mildly Joe Dante vibe, however: a good thing!)
But the attempts at suspense and action are generally flat and boring and bad! This is incredible to me, as the director is Richard Franklin, who made Road Games, a corker as I recall; and Psycho II, which I’ve always been fond of! I even enjoyed Link, at least a little bit! And back in his happy college days Franklin met Hitch, and was a lifelong student and fan of the portly suspense-master, and so I can’t imagine what happened with the theoretically Hitchcockian Cloak & Dagger! Maybe it was just too hard to make a nighttime picture like this with not one but two kids! (Davey has a little girl friend, played by Christine “Sword and the Sorcerer” Nigra, who shares in his adventure; he also has the requisite adult nerd friend, who is played by none other than William “Smokey Bites the Dust” Forsythe!) Even the daytime scenes are lame, like Davey’s debarkation from a slow-moving little boat almost too wide for the stream it’s floating in! Ha ha, Hitch would have told San Antonio where to go and relocated the whole thing to Niagara Falls so he could shoot that scene at the crest of the Horseshoe Cascade!
I guess the movie is for gamers, or ex-gamers, neither of which I am! I was never even sure if the game Cloak & Dagger was a sort of role-playing game, what with its many-sided dice and painted lead figures, or a video game, or some amalgam of the two! I give Cloak & Dagger one incredibly large nerd die! Two such dice appear in the picture, but I only give the movie one! Sorry, Cloak & Dagger, ha ha!
Posted by Burl at 22:57