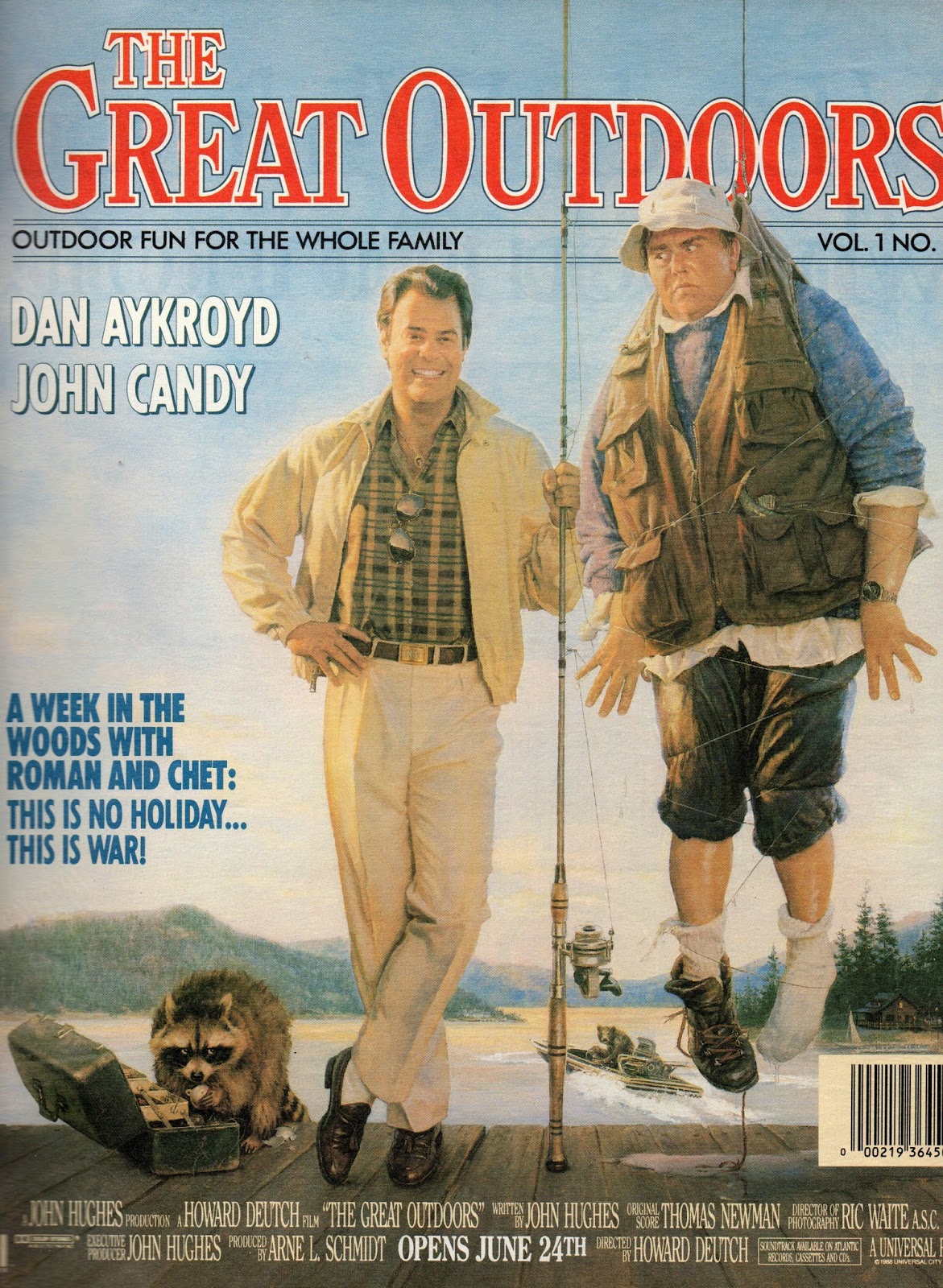 Ha ha, time to go deep, deep into the piney north woods with Burl to review The Great Outdoors, a picture from John Hughes and Howard Deutch, the same team that brought us Some Kind of Wonderful just one year earlier! This time it’s not a teen angst fest though, but, purportedly, a goofy family comedy!
It’s another movie where John “The Silent Partner” Candy goes on vacation, just like he does in Summer Rental, and again it all goes hooky-pooky! Because, wouldn’t you know it, just moments after he and his family (wife, two boys) install themselves in a fantastically huge lakeside cabin owned by Robert “Christine” Prosky, along comes his brother-in-law Roman, uninvited, to mess up the week! Roman is played by funnyman Dan “Ghostbusters” Aykroyd, and he’s a slickster investment-banker type with a wife and two daughters modeled after the twins in The Shining! (Twilight Zone music plays whenever they appear on screen, which I suppose is slightly better than using the shower cue from Psycho! But not much!)
From there the movie is mainly plotless! Candy’s Chet and Aykroyd’s Roman have a mildly antagonistic relationship, which plays itself out shaggily through the first two acts, then suddenly becomes more heated largely so the picture can move into its final act! The other members of their families mainly just sit around and watch, though Candy’s older boy finds time to strike up a romance with a pretty local girl (which supplies the teen angst we expect from Hughes, ha ha!), and the two little girls get themselves lost in a dynamite-filled bear cave so the picture can have its climax! (Some Chekhovian law or other is brazenly flaunted by the unbelievable fact that this dynamite never goes off!)
The best part of this picture comes near the beginning, when Chet tells the story of a bear encounter he’d had in that very cabin, years before on his honeymoon! He’d fired a shotgun at the bear and, while failing to wound it, had taken all the hair off its head with his buckshot! Towards the end of the picture this very same baldheaded bear returns, and I was astonished to find by watching the credits that the picture’s Special Makeup Effects, which credit I assume is in reference mainly to the bear’s glabrous pate, had been created by none other than Rob “The Thing” Bottin! Ha ha! The bear itself is of course played by Bart, and not to be a name dropper, but he’s a celebrity I’ve actually met! At a certain distance of course, ha ha!
But aside from the bear and an opening set to “Yakity Yak,” most of the movie is pretty dire, and I say this as one who appreciates the comedy stylings of both Candy and Aykroyd! Ha ha, it’s just not a very funny picture! I suspect director Deutch is a man without much of a sense of humour, and that what hilarity could be gleaned from Grumpier Old Men came only in spite of his work! As for Hughes, well, he provides a few bon mots, but this feels like something he tossed off over a weekend at his own lakeside cabin! There’s a certain country coziness to it, but it’s too episodic and ramshackle even to provide 80s comedy-level amusement! So in the end, it’s my sad lot to give The Great Outdoors one set of bear buttocks!
Posted by Burl at 12:31