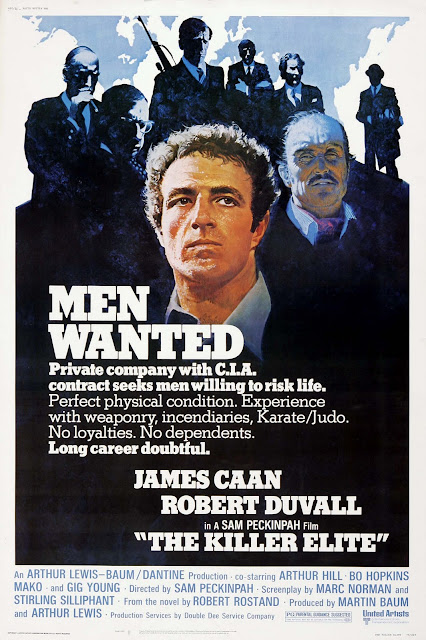 Good day, gumchewers! Yes, it’s Burl, and I’m here with a review for you, and guess what: it’s just a touch of Peckinpah! This is from the director’s days of decline, it must be said, but not yet the curious blauchup that is The Osterman Weekend! No, today’s action picture is in fact The Killer Elite!
We open with a neatly-edited credit sequence showing dynamite bombs being set and other close-quarters activities! Then a building explodes and we meet our hero, played by James Caan from Misery, and his co-worker and goodbuddy Robert Duvall from The Paper and Jack Reacher! They work for some kind of mysterious company which does secret killings and explodings and rescues on behalf of, you guessed it, the CIA! Ha ha, but beneath all the 70s macho posturing, sexist joking and maniacal laughter, the stage is set for betrayal: Duvall surprises his pal by blasting chunks out of his elbow and kneecap and announcing to the writhing Caan that he is henceforth retired!
For some reason the picture then chooses to focus on Caan’s surgeries and his long recovery process! As in An American Werewolf in London, the patient leaves the hospital in the company of his nurse, and they set up house together! Caan is limpy and be-caned, but he takes martial arts lessons and learns to biff and bonk with his cane, in effect to use his disability as a weapon! Company representative Arthur Hill, whom we may recall from from Butch and Sundance: The Early Days, offers Caan a job: to protect a Japanese politician played by Mako from Armed Response! Caan needs a team, so he in turn recruits Bo Hopkins from Mutant, playing a demented marksman, and Burt Young from Blood Beach, playing a more reserved version of just the sort of character Burt Young was so good at playing!
Hopkins does the same kind of crazy routine he did for Peckinpah in The Wild Bunch, only this time wearing glasses! Another Peckin-veteran is Gig Young, who gave a boozy, eccentric performance in Bring Me The Head of Alfredo Garcia, and gives another one here! Ha ha, it’s most entertaining! The climax of the picture, featuring Caan versus Duvall in some kind of shipyard along with various ninja henchmen and of course Caan’s backup crew, has plenty of action but is still somewhat underwhelming! However, if you’ve ever wanted to see Burt Young fight ninjas, this is probably your one and only chance! Ha ha!
The whole movie is a bit clunky and confused, but it certainly has its moments! The cast alone makes it worth watching, and the nice 70s look given it by cinematographer Philip Lathrop, who also shot The Monster of Piedras Blancas, is a pleasant icing atop the cake! It’s no classic, but I’m glad I watched it, and I give The Killer Elite two gin and fizzes!