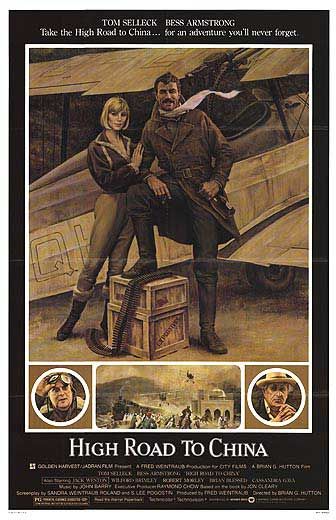 Yippee-yippee-hey, it’s Burl! I've got a forgotten picture of the 80s again today, ha ha! Yes, High Road to China is surely to biscuits one of those movies that only got made because of Raiders of the Lost Ark! For that reason, it often gets unfairly maligned as a Raiders rip-off, but it’s not! Ha ha, it’s pretty clearly an African Queen rip-off!
Any other maligning the picture receives is just and proper! This was, I believe, Tom Selleck’s first dip into feature film stardom, before Lassiter even, and the fact that old Tom had famously been offered the Indiana Jones role only increases the assumption that his character in this movie, O’Malley by name, is going to be searching for some kind of lost city or treasure! Well I suppose it is a form of treasure he’s after, but something more valuable than any treasure could be! For, ha ha, their treasure is BRIMLEY!
Yes, it’s all about a spoiled heiress about to lose her fortune to Robert Morley (from The African Queen, natch!), and so to find her father, last heard of in Afghanistan, she has to hire dipsomaniacal airman O’Malley and his jovial mechanic Struts, played by Jack Weston of course, because who else could do it? Not Martin Balsam! Anyway, ha ha, relations between O’Malley and the heiress are strained for a good part of the picture, though even when attracti*n strikes, and however drunk he is, O’Malley always remains un vrai gentilhomme!
The heiress is a good pilot herself, and her dad is of course Wilford “The Thing” Brimley! Ha ha, Brimley here is as jovial as I’ve ever seen him in a movie! This must be his most jovial role ever, I don’t care if he’s played Santa! Ha ha! Wilford has somehow strode into a Chinese village and become its leader, which is something they need since a Gengis Khan type is constantly attacking the village! Wilford’s strategy, which provides the picture’s climax, involves detonating incredible amounts of explosive beneath the feet of the siege forces! Everyone gets blown up and Wilford dances a merry hornpipe! Ha ha!
Tom Selleck really had his niche carved out in the 80s: Cary Grant reborn! (Ha ha, at least until Runaway!) His particular shtick, as near as I can pinpoint it, is to be unexpectedly whiny for a big handsome moustache man! But he has a standout scene in this picture, which is, I suppose, his attempt at the Indianapolis speech from Jaws! He segues from regaling a gang of airmen with his tales of WWI glory in the skies to a sorrowful reminiscence about the young, frightened near-children he was shooting down by the war’s end! Pretty somber stuff, and surprisingly well performed by the fur-lipped lug! Ha ha!
But the action is pretty banal, and there’s no more chemistry between Selleck and Bess “11th Victim” Armstrong than there was between the blockheads of Summer Catch! The direction from Brian G. Hutton, who also made The First Deadly Sin and was an actor in Carnival Rock, is merely functional! Really, there’s nothing much memorable about this picture, though I do admit that the planes are very nice! Some pretty daring stunt work too! However, the picture never rollicks as much as it would like to, seriously lacks in the pep department, and, as much flapper dancing as Bess Armstrong does, it never seems much like we’re actually in the 1920s! On the other hand, Brimley! Ha ha, I guess I’ll give High Road to China one and a half drop-bombs!
Posted by Burl at 21:53