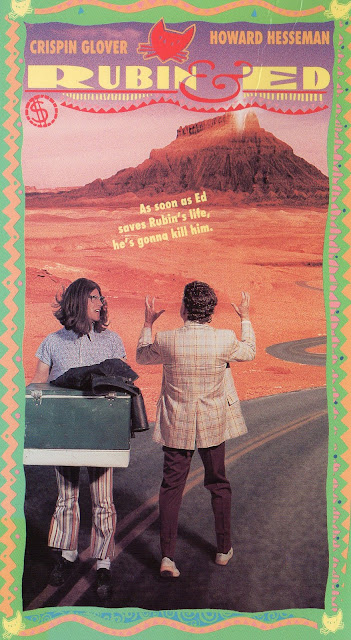 Well hello there, stranger! It’s Burl! I’m here to review a picture that many of you won’t have seen or even heard of, and yes, I’m talking about Rubin & Ed! Ha ha, it’s a buddy picture, and a little bit of a road movie too, and it’s set in Utah to boot, just like Sweater Girls and The Boogens; and while neither buddy, road nor Utah pictures are in my list of top movie subgenres of all time, I can certainly appreciate them when they’re done well!
Rubin & Ed will remind viewers of catholic tastes a little bit of the Gus Van Sant movie Gerry, in which two guys drive out to the middle of nowhere for reasons that are at best hazy, and then start walking through the desert toward some ambiguous goal, having nonsensical conversations all the while! Ha ha, that’s pretty much what happens here! Ed, played by Johnny Fever from WKRP, is a lifelong loser whose last chance for success and self-respect, he thinks, will come from a guru-like sales seminar, and so to achieve his sales goal he tries to recruit Rubin, a reclusive longhair in mourning for his recently deceased cat, into the obviously shady sales organization! It goes without saying that Rubin is played by Crispin "Friday the 13th part 4" Glover, ha ha!
Next thing you know, Rubin and Ed are marching through the desert with the dead frozen cat packed in ice! Rubin drinks the melted catwater from the cooler every now and then, or else wrings out his Odor Eaters for further liquid sustenance, while Ed just gets thirstier and thirstier! Eventually Rubin ends up in the Cave of the Echo People and has hallucinations in which his huge shoes get even bigger! And for those who ever wondered why Crispin Glover ever tried to kick David Letterman in the head, this movie will answer all of their questions!
Ha ha, I guess this is what they mean when they talk about cult films! There’s a cult for this one and no mistake, and the watchword among its members is “My cat can eat a who-o-ole watermelon!” I like the film because it’s often pretty funny – a lot funnier than Due Date, which seems to have modeled itself on this one almost as much as on Planes, Trains and Automobiles –  and because it seems possessed of a genuinely humanistic spirit! Both characters seem like they'd be genuinely difficult to get along with, and neither of them change all that much in the end, just to achieve some contrived rapprochement as we see in more mainstream buddy movies, where personalities are often altered completely somewhere in the third act!
Plus I love the dedication Crispin Glover shows! It helps that he’d been doing the character for years before the movie was shot, but nevertheless, there’s no winking and nodding to the audience from Rubin! He’s a genuine eccentric, and a Republican too! Ha ha, somehow that makes sense in the context of the movie, even though I’m fairly sure that by and large Republicans don’t like cats!
I heartily recommend this picture to any and all who appreciate movies which set modest goals for themselves and achieve those goals very handily! I give Rubin & Ed three whole watermelons!
Posted by Burl at 16:47