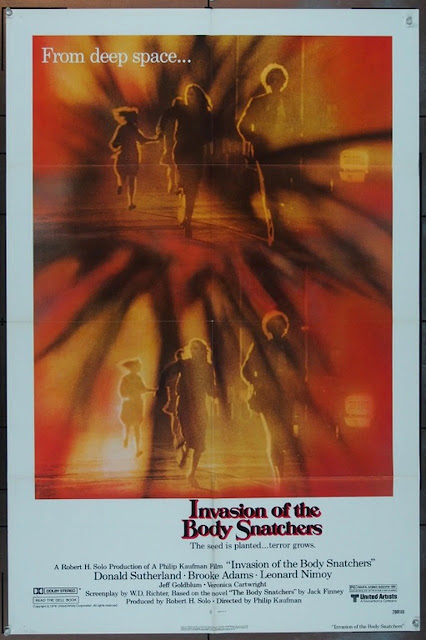 Hello, it’s Burl, and believe me, it really is Burl, not an outer space replacement! Ha ha, you know it’s me, because I don’t think my pod replacement would laugh quite so much, or if he did, it would be in a sinisterly robotic fashion! No, it’s good ol’ Burl, here to review possibly my favourite iteration of that old tale of poddery, Philip Kaufman’s 1978 remake of Invasion of the Body Snatchers!

Now, I’m sure I don’t need to defend my preference for this over, say, the Abel Ferrara version, Body Snatchers (which I still enjoyed quite a bit!), or close cousins like The Puppet Masters, which has its own modest charms perhaps! There will be some, though, who are aghast that I would like this better than the original Don Siegel picture! I suppose it’s because I’m a city kid, so can better relate to the unease of urban dehumanization than I can to the small-town version we see in Siegel’s film! Anyway, the old one is excellent, don’t get me wrong - ha ha, and so large did it loom in the cine-political firmament as I was growing up that I used to believe “McCarthyism” referred to the star of the picture, Kevin McCarthy, and not the diseased Senator Joseph McCarthy! Ha ha, shows to go you where my interests lay!

Anyway, we’re here to talk about Kaufman’s picture, which, by the way, employs both Siegel and McCarthy in important cameo roles! We also get Robert Duvall from The Killer Elite in a strangely sinister appearance as a swinging street priest! But our stars are San Francisco public health official Matthew, played by Donald Sutherland from Klute and Heaven Help Us (and The Puppet Masters, ha ha!) and his co-worker, on whom he clearly and understandably nurses a big crush, Elizabeth, played by Brooke Adams from The Baby-Sitters Club!

Of course spores come from space right at the outset, and right away Elizabeth’s husband, played by Art Hindle from Black Christmas and Porky’s, is replaced by his pod double, and becomes emotionless and uncaring about sports, a subject on which he previously was compulsive! The feeling of a grip being slowly tightened settles over the movie, and ordinary street scenes acquire a disquieting menace! Kaufman, who later brought us The Right Stuff, also brings it here with his masterful control over the material!

He also put together a stellar cast: in addition to those mentioned, we get a new agey couple who run a mud baths, played by Jeff Goldblum from Buckaroo Banzai and Veronica Cartwright from The Birds! Ha ha, a terrific couple, and then too we have Mister Spock himself, Leonard Nimoy from Star Trek Into Darkness and The Brain Eaters (which, being an off-brand adaptation of Robert Heinlein's original The Puppet Masters, is another cousin to the Body Snatchers series)! Ha ha, what a bonanza! All the performers acquit themselves admirably, with Sutherland especially good!

Terrific photography by Michael Chapman, marvelous trick makeup by Tom Burman and family, and great San Francisco location work all make for a movie that’s a jewel of a pip of a beauty, and a real work of craftsmanship! Ha ha, and watch out for that ending! The post-Nixon paranoia, the satire of 70s self-help, the character work, the eerie use of ‘Amazing Grace,’ it’s all part of this wonderful and of-its-time picture, and I give Invasion of the Body Snatchers three and a half man-headed dogs!