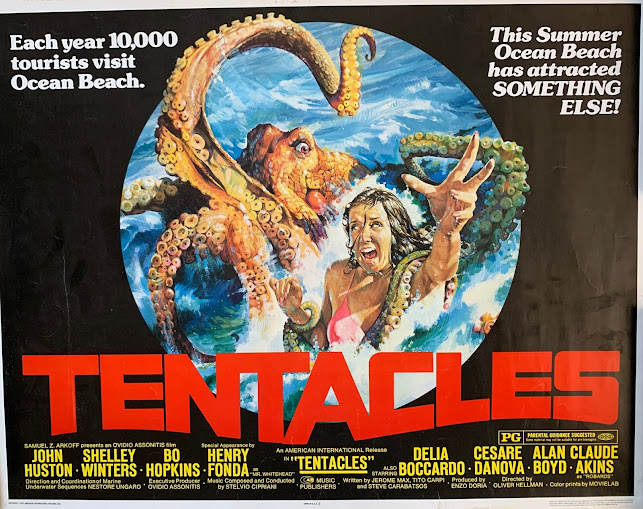 Ha ha and handshakes, it’s Burl, here to rassle with cinema’s eternal problem: how to make an octopus seem huge and threatening on film? 20,000 Leagues Under the Sea did a pretty good job with their squid, and I’m even a little fond of the one in Peter Benchley’s The Beast! And of course there’s It Came From Beneath the Sea, but otherwise the octopi usually don’t get the titular roles, or even featured parts - ha ha, look at The Goonies, which left its octopus on the cutting room floor, but had the cruel audacity to maintain a reference to it in the dialogue! Outside of the Sharktopus kind of stuff, which even ol’ Burl finds nearly unwatchable, and close kin to same like Eye of the Beast, there aren’t many good movie octopi to choose from!
But ho! you say, what about Tentacles? Ha ha, I remember seeing this picture on television many years ago, in the flower of my youth, and it made a real impression! I never forgot the portly fellow who suffers a calamari attack and is pulled around with his feet sticking out of the water! Naturally the picture is a direct rip-off of Jaws, whose imitators always seemed the most brazen; but aside from setting up a close reworking of the small seaside town situation found in the Spielberg picture, Tentacles can’t come close to maintaining the beautiful simplicity or primal power of its inspiration!
Directed by Ovidio G. Assonitis, who of course also brought us the nerd-in-love comedy Desperate Moves, the picture is set, and even mostly shot, in a small California coastal community! In the very first scene, unnecessarily in my opinion, a sweet young baby relaxing in his stroller becomes the first victim of Tentacles! Tentacles, a rampaging monster who sucks the very marrow from the bones of his people-meals, next plucks a bandy-legged fisherman from his craft, and later on he wrecks boats and eats portly men!
John Huston and Shelley Winters, both of whom would catch a case of Assonitis again when they appeared in The Visitor, play an elderly brother and sister who live in the beach community Tentacles has chosen for his feeding ground! Huston is, as one review has it, “the sort of grizzled investigative reporter who wears his nightdress on the porch,” and Winters plays a hot-to-trot divorcée with a young son! Meanwhile, up the coast, Bo Hopkins from The Killer Elite plays an orca expert, while Claude Akins of TV’s Lobo plays the local lawman!
Henry Fonda, who had no sea monsters outside of a decent-sized trout to deal with when he hung out On Golden Pond, plays Mr. Whitehead, the owner of a construction company and an almost completely pointless character! Ha ha, I suppose Mr. Fonda thought “Hmmm! Once Upon A Time in the West turned out pretty well! Maybe I’ll do another picture with these Italian fellows! Ha ha!” But Tentacles is not quite up to the level of the masterful Sergio Leone western, I’m afraid! Cesare Danova from Mean Streets carries most of Mr. Whitehead’s narrative burden anyway,  surreptitiously ordering the vibration-drilling experiments theorized to be the cause of the calamari’s murderous rage, and leaving the old man to play most of his scenes upbraiding people over the telephone!
I guess I’m kind of talking around the star of the picture, Tentacles himself! Well, I think that’s because he’s a bit of a disappointment! Most of the time we see what looks like a perfectly normal octopus, intercut with shots of people screaming, or bubbles coming from the mouths of divers! For one scene of boat destruction the filmmakers pull out a fake head that gets pushed though the water and frankly looks more like a swimming hippo than an octopus, and there appear to be a few fake appendages waving around here and there! I wish they’d pulled off a good old-fashioned fake ‘pus, complete with clicking beak and eight arms to hold you! Carlo Rambaldi could have made a good one for them, I’m sure! They did pull off a few good moments involving Tentacles’s glaring angry-eyes, though!
The picture’s got that charming ESL atmosphere of so many offshore Italian productions (though Assonitis himself is Greek-Egyptian or something), some enjoyable wide-screen photography, and a little of that genuine seaside summer atmosphere that Jaws manages so well! Plus it’s got some laughs and some very weird performances from Huston and Winters! Bo Hopkins just looks a little embarrassed as he orates to his orcas before asking them to kill the octopus for him, which they do! Ha ha! I give Tentacles two fish standing on their heads!