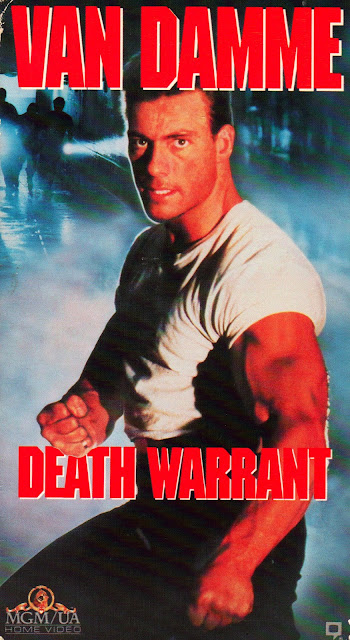 Ding-bong-wao, it’s Burl, here to review you an action picture! This is one of those Jean Claude Van Damme movies, but an earlier one! Ha ha, he’s fairly young here, not an old and depressed robot like he was in Universal Soldier: Regeneration! He’s as vigorous a punchfighter as ever in this particular picture, which is known by the title Death Warrant!
This is one of The Muscles From Brussles’s leaner and meaner productions, clocking in at an even 90 minutes just like Commando! It also features a credit for Special Makeup Effects, which I always like to see in an action picture! And indeed there are a few Special Makeup Effects on view here, though in fact the movie wasn’t quite as violent as I expected it to be! That’s all right with ol’ Burl, since violence in pictures isn’t exactly my first priority!
In these earlier Van Damme movies it was always fun to see how they’d explain away his accent! Sometimes he was a French Foreign Legionnaire and sometimes a Cajun, and the logical allez-vite-la-twists reached a sort of apotheosis in Sudden Death, in which he sported an accent merely because, as a lad, his character had spent his summers in Quebec! Ha ha!
Here he plays a Mountie, which is pretty great, because near the beginning, when he’s going rogue in L.A. to catch the nefarious Sandman, a local policechief shouts “This is Los Angeles, ha ha, not Canada! We have procedures!” Ha ha, Rodney King will be glad to hear that, Mister Policechief!
Well, Van Damme ignores this and shoots the Sandman about a half a dozen times, then says “Ha ha, you’re under arrest!” A little while later, those very same Angelinos ask our intrepid Mountie to go undercover at the local prison, where inmates are being spiked through the back of the head! His job is to pretend to be a prisoner and find out who’s behind these brutal pokings!
He does this by immediately asking everyone in the prison who could be behind the brutal pokings, which doesn’t make him look like an undercover policeman at all, ha ha! And then, when the Sandman turns out somehow not to have died when Van Damme blasted him, and is transferred to the prison, the poor Mountie has a lot more trouble all of a sudden! Punchfights aplenty ensue!
There’s a not-bad supporting cast here! George Dickerson, the always-smiling actor from Blue Velvet, plays a character who turns out to be just the sort of fellow anyone who’s seen that film would expect him to be! Benson himself, Robert Guillaume, plays the Wise Old Black Lifer! The nasty head guard is played by Art La Fleur from Cobra and Zone Troopers! Naturally Al “Die Hard” Leong shows up! So it’s a pretty fun gallery of familiar faces!
It’s not a memorable picture, and the director, Deran Serafian, who made Alien Predators, and whose dad made Eye of the Tiger and also the great Vanishing Point, isn’t all that marvelous an action director! The punchfights are a little drab, despite the flashy lighting from DP Russell “Pet Sematary 2” Carpenter! Altogether, I’m going to give Death Warrant one and a half hilarious furnace jumpouts!
Posted by Burl at 09:46