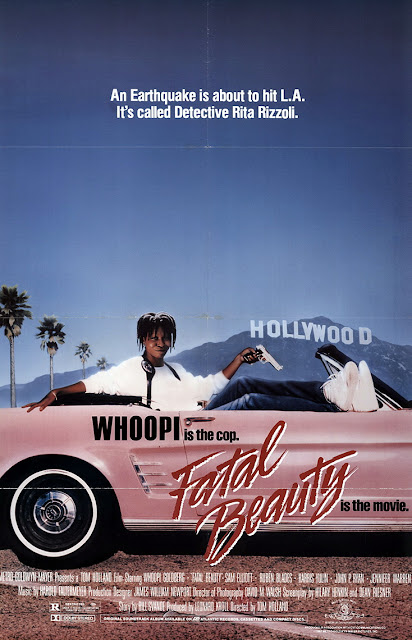 Ha ha, the funny thing is, other than The Color Purple, which I haven’t seen since 1985 or whenever, and The Player and I guess Girl, Interrupted, I don’t think I’ve ever seen one single Whoopi Goldberg movie before! Ha ha, and don’t scream “Ha ha, Ghost!” at me, ha ha, because I’ve never seen it! But now I’ve seen Fatal Beauty, which is when Whoopi teamed up with Tom Holland, who wrote The Beast Within and directed Fright Night!
It’s pretty 1987, ha ha, but if you’ve ever wanted to see Whoopi and Jennifer “Night Moves” Warren have a punch-up, this is where you want to dock your boat! If your fondest wish involves Charles “The Thing” Hallahan as a nasty cop and John P. “Avenging Force” Ryan as the angry police captain who gives Whoopi heck, steer your buffalo here! If you’ve ever desired to see Whoopi make sweet love with Sam Elliott from Road House, however, you’re out of luck, since, so the story goes, gutless studio executives excised the scene after apparently bigoted test audiences were ruffled by the interracial aspect! This doesn’t just look goofy from our slightly-more-racially-enlightened times, it was goofy then too!
Ah well! The movie’s a pretty straightforward 80s cop thriller, with the businessman-drug dealer, the henchmen, so forth, the umbrella hair, the bloody squibs! Ha ha, this is a squib movie, all right! Whoopi is the sort of cop who frequently has to go undercover as a ridiculous caricature of a prostitute, and she’s after the dealers of a deadly new mind-drug called, ha ha, “Fatal Beauty,” which of course is stenciled across each little baggie of the stuff! But beware, because one sniff of “Fatal Beauty” brings on a case of the terminal jim-jams!
Whoopi’s partner is a stylish and laconic Hispanic fellow, who gets wounded but thankfully not killed in the process of the investigation! I say thankfully because he was probably my favourite character in the movie! Another enjoyable character is the main henchman, who actually seems more like the principal bad guy; he’s played by Brad Dourif from Dune! And Whoopi, whom I’ve been calling ‘Whoopi” because that’s a fun word to type and to think about, is named “Rita Rizzoli” for some reason! Ha ha, I suspect it’s because the part was originally intended for someone like, I don’t know, Madonna! That’s pure speculation on my part, but remember, Beverly Hills Cop was originally a Sly Stallone vehicle! Ha ha!
One thing that sets the movie aside from most of its contemporary genre-mates (and the only thing, really) is that putative love interest Sam Elliott starts out as one of the bad guy’s henchmen, in fact his chief henchman! Elliott seems to turn up everywhere Whoopi goes, helping her out of scrapes or just observing her as she razzle-dazzles perps with her manic improv skills!
Whoopi is okay in the movie! She gets a very sad backstory and delivers it well! But the rest of this thing, and I’m agreeing with the portly critic Roger Ebert here, is very paint-by-numbers, the more so in retrospect! As mentioned it’s very, very 1980s, with the remonstrating ghost of Nancy Reagan seeming to hover overhead at all times; but it also looks ahead slightly to the even more generic cop movies of the 90s, which, ha ha, is not a compliment! I watched the whole thing though, and that, in my current state of finding it difficult to watch a whole movie, much less review it, is a sort of compliment I suppose! It’s the best I can muster anyway! I give Fatal Beauty one pair of hand glasses!
Posted by Burl at 00:12