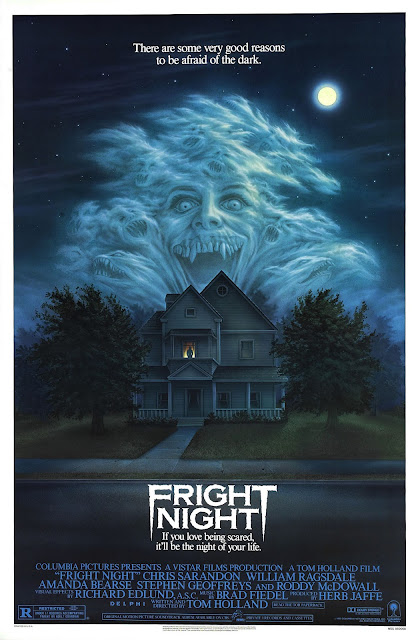 So many wonderful pictures came out that summer! In May there was James Bond fighting Christopher Walken on a blimp in A View To A Kill, Chevy Chase using hilarity to fight Tim Matheson in Fletch and Rambo fighting just about everybody in Rambo! In June came The Goonies (which I dutifully saw, but thought was pretty dumb), Silverado (which I saw later and felt was okay), Cocoon (which I saw in the theatre twice in one night so that I could play a joke on my friend!) and St. Elmo’s Fire, which isn’t worth a carbuncle, but for some reason I really love the poster! Ha ha, the heat this summer is at St. Elmo’s Fire! A great capper of that month was Lifeforce, an awesome picture I will certainly try to review soon!

And then in July it started to get really good! There was Back to the Future, Mad Max Beyond Thunderdome, Day of the Dead, and the movie that I thought was way better than The Goonies, Joe Dante’s great Explorers! And finally there was August, with all sorts of fine films: the Teen Scientist Trilogy of Weird Science, Real Genius and My Science Project, along with such fantastic fare as Teen Wolf, Pee Wee’s Big Adventure, Better Off Dead, Return of the Living Dead, Godzilla 1985 and, of course, the subject of today’s review, Fright Night!

The movie starts with a great crane shot past a very familiar-looking neighborhood (I think it was the same one as in The ‘burbs or maybe some other downmarket Spielberg production) to the house of Charley Brewster, a teen lothario just about to score with his rather dowdy girlfriend – when all of a sudden a scream pierces the night! Seems a vampire has moved in next door, and he’s brought his handyman with him!

Charley loves horror movies, but not as much as his pal Evil Ed does, and so he relies on Ed to help him figure out how to stop the undead fiend! They consult a local horror movie star, played by the great Roddy McDowell from Heads, and he gets drawn into the case very much against his will! There’s lots of biting and running around, and poor Evil Ed is overcome by the creature of the night! But eventually they get rid of the vampire – sort of!

Evil Ed is a really fascinating character, and he was played by Wendell Tvedt from Fraternity Vacation! Have you seen that one? It’s got Tim Robbins in it as a frat boy, and Barbara Crampton from Re-Animator, a movie I love! Anyway Evil Ed quit the legitimate cinema and started making homosexual pornoo! But now I understand he’s making regular horror movies again, and I think that’s great! Not that there was anything wrong with his other movies as long as he enjoyed making them!

But Fright Night was one of my favorite movies of that whole exalted summer, and remains a movie I enjoy! Some very horrible vampire fashions are in it, and some so-so music (some good music too), but it has a lot of pep, some excellent trick effects, a clever script, and a classic mid-80s look, courtesy of Some Kind of Wonderful cinematographer Jan Kiesser! I give Fright Night three vampire bats!
Posted by Burl at 21:47

Email ThisBlogThis!Share to TwitterShare to FacebookShare to Pinterest
Labels: 1980s, horror, house, saw it on the big screen, supernatural, vampire