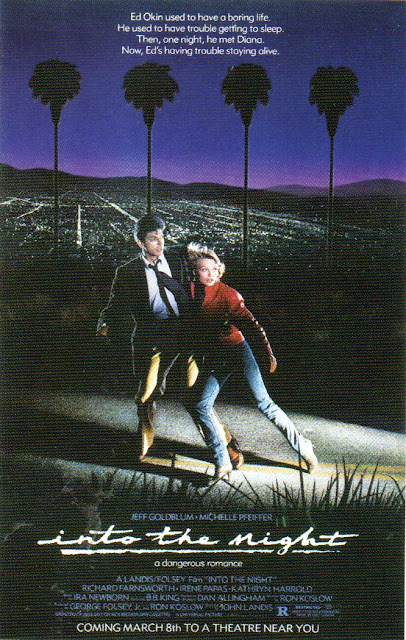 The clock strikes twelve, and with a sudden ha ha, it’s Burl! I’m here to review an old favourite, a John “¡Three Amigos!” Landis picture called Into the Night! It was not one of his box-office hits, ha ha decidedly not, but it solidly targets one of ol’ Burl’s sweet spots, and that’s the Oddball Studio Picture!

I think you know what I mean! I’m talking about the sort of movie that has very little commercial appeal, and therefore seems an unlikely product of a system in which commercial appeal is the absolute, a-number one priority, with each potential production ruthlessly and scientifically vetted by many unforgiving parties for just that quality before it’s given the green light! And yet Into the Night must at some point have been given a green light, because it exists, but yet, ha ha, aside from a few pretty girls and a little gunplay, it possesses almost none of what we think of as commercially appealing elements!

The lead character is a sad sack insomniac named Ed Okin, played by Jeff Goldblum, ha ha, who discovers that his wife is having an affair! His response is to drive to the airport, where he plans to hop on a plane to Vegas for a wild weekend! Instead he meets a lady on the run played by Michelle Pfeiffer, and embarks on a nutty night of unlikely cameos! Actually, although I always think of this as a One Crazy Night picture like After Hours, it takes place over a night, a day, and I think another night!

Ha ha, and if you want director cameos, belly up! David “Fast Company” Cronenberg appears as a nasty executive; Jack “Tarantula” Arnold shows up walking his dog; Jonathan “Caged Heat” Demme is a cop; Amy “Fast Times at Ridgemont High” Heckerling is a waitress, and so forth! You even get people like the film’s cinematographer, Robert Paynter, and of course Art “Fright Night” Evans and Clu “A Nightmare on Elm Street 2” Gulager! And many, many more!

The movie’s not conventionally funny (though it has laffs!) or suspenseful or moving or exciting, ha ha! The narrative is slack, the characters fairly one-note and the style flat in the classic Landis manner! And yet I find this an enormously entertaining picture, with terrific rewatchability! I can’t really tell you why that is, even though I realize that’s meant to be the point of this movie review blog, ha ha! You’ll just have to trust ol’ Burl, who has certainly never led you astray before! But if pressed, I’d say the cast has a lot to do with it, and the grand nighttime tour of old Los Angeles this picture provides!

And I guess it’s just a movie I watched a lot as a youngster, believing it was sophisticated! Ha ha, that kind of thing sticks with you! Anyway, I’d like to recommend this picture to you, and give it three David Bowie mustaches!
Posted by Burl at 21:33