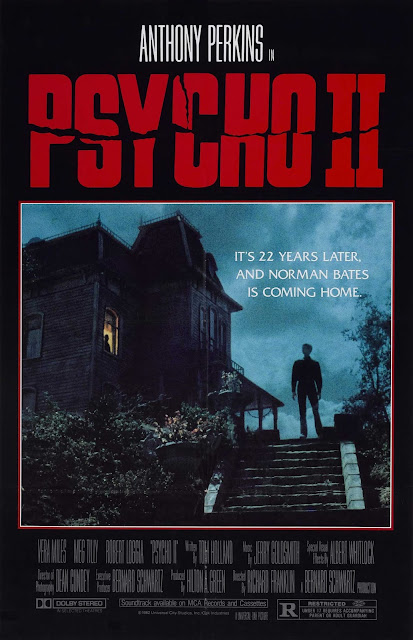 Ha ha and c-c-c-cutlery murders, it’s Burl, here to review a long-gestating sequel! Yes, it took them twenty-two years to make a follow-up to the great-granddaddy of slasher mysteries, Alfred Hitchcock’s Psycho, and, although the original book’s author Robert Bloch had written his own follow-up, in which Norman Bates travels to Hollywood and puts a poking on some people making a movie of his life, for this movie the filmmakers chose to keep the character in the same motel and creepy house-based environment as in his original adventure!
As the picture opens, Norman, having been pronounced nervous but sane, is being released from his long years of psycho-incarceration! His friendly psychiatrist, Dr. Robert Loggia, whom we recall from Innocent Blood and The Ninth Configuration, sets him up in his old house and with a job as a short-order sous-chef; but there is plenty of opposition to his release too! This mainly comes from nasty Lila Loomis, the sister of Janet Leigh’s character in the first picture, played as in the original by Verna Bloom from Into the Night! She embarks on a relentless campaign to send Norman back to the bughouse!
But, ha ha, other influences are afoot! Pixie-cutie Meg Tilly, whom we remember from Impulse, also works at the diner, and becomes a part of Norman’s life, soon even living with him in that iconic house! There’s also the crass motel manager played by Dennis Franz from The Fury and Die Hard 2! It’s the kind of part he could do in his sleep, but he does a fine job with it and of course meets a sticky end when the cutlery murders start! It being the 1980s, these are a little gorier than they were back in Hitchcock’s day, with some welcome Special Makeup Effects pepping things up here and there!
Now, it’s no Psycho, but, ha ha, that’s a given! Director Richard Franklin, who brought us pictures like Road Games, Link and of course Cloak & Dagger, does a perfectly acceptable job, though I’d like to see what Brian De Palma might have done with it! Anthony Perkins, whom we recall from ffolkes, is the big draw here, and makes Norman as innocent and likeable as you might want! Ha ha, you’re really pulling for him here! Anyway, secrets are revealed, twists are taken, there’s a terrific score from Jerry Goldsmith and nice cinematography from Dean Cundey, and it's got a solid supporting cast! It doesn't always make sense, in particular much having to do with Tilly's character, whatever her motivations, but it's still a good stately slasher!
I’ve always liked the film, perhaps more than it really deserves, and have thought of it as a worthy if obviously inferior follow-up to the original! I’m enamoured of Perkins’s slightly wacky but very good performance: though we can’t help thinking of Norman now as a cliché, this is hardly his fault; and in the end, thanks in part to work Perkins does in the sequels, and in defiance of the cartoonizing of the serial killer momma’s boy type, he feels very like a real person! Also I think Franklin directed it with some restraint, plucking mainly from his own toolbox rather than from Sir Alfred’s! And I like that it’s a little gory, as is number III as well! So, for an admiration that’s freely mixed in with fond reminiscence and the comfort of repeat viewings at a formative age, I give Psycho II three breaking chairs!