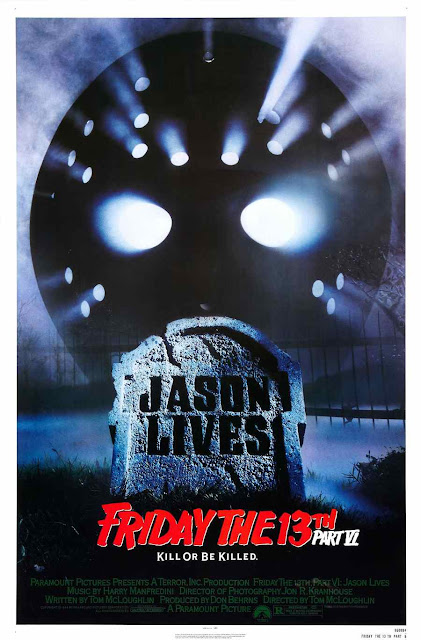 It’s mid-summer, and so naturally it’s time for ol’ Burl to tackle one of these Friday the 13th movies! Jason Lives seems like a pretty good place to start, since it’s the one that makes me go “Ha ha!” the most! By that I mean it’s the funniest of all the movies, though not necessarily the best – I’d have to say that if I were going to pick a favorite, it might be that old standby The Final Chapter! Ha ha, the fact that its subtitle is an outrageous falsehood only makes it better!
This one caught a bit of heat for taking Mr. Jason out of the realm of the living and making him a completely supernatural zombie killer! You could easily argue, as many who actually care have done, that since he drowned in the first movie he was already a zombie, but that’s splitting hairs, ha ha!
Anyway, the movie starts with Tommy Jarvis, who was the kid who shaved himself bald in Part 4, and I forget what he did in Part 5, and his friend Horshack driving out to the cemetery to see what they can do about Jason! The thing to do would have been to totally leave him be, and even Horshack knows this, but Tommy is far too stupid to realize it! So he digs Jason up and manages to get him reanimated through the power of lightning! Ha ha, a dumber move could hardly be imagined, and it doesn’t really serve to get you in the character’s corner! Unfairly enough it’s Horshack who pays the ultimate price – he gets his heart ripped out and is dumped back in Jason’s coffin to be munched on by maggots!
Well, the rest of the movie goes back and forth between Tommy trying to undo his dumb move by convincing an incredibly angry and aggressive police chief that Jason lives again, and scenes of Jason poking people with sharp implements! He cuts off three heads at once, rips off arms, impales some people and gives other ones a pretty stiff neck-twist! Ha ha, one old jasper gets a broken bottle in the throat!
Eventually Jason makes his way to the old camp where he used to dwell – it’s been fixed up and reopened for some reason – and terrorizes some councilors and the smart-alec kids in their charge! I have to give this movie credit for including kids, because in most of these movies there are usually a bunch of teenagers and you’re not sure whether they’re campers or councilors or something in between! There’s a pretty good little scene between two of the kids: in the middle of Jason’s rampage, one of them turns to the other and asks “What were you going to be when you grew up?” Ha ha!
I remember that this movie was actually released in the middle of the summer of 1986 – there must have been a Friday the 13th on the calendar! I snuck in and saw it in the theatre, but by then my tastes were refined enough that, while I enjoyed the movie, Aliens, The Fly, Stand By Me, Big Trouble in Little China and Manhunter were pictures I held in much higher esteem! Ha ha, I think I even preferred Maximum Overdrive! Nevertheless, this was a fairly enjoyable effort as Friday the 13th movies go, and I award it two overturning RV campers, and an extra ha ha for the Alice Cooper fans out there!
Posted by Burl at 15:26