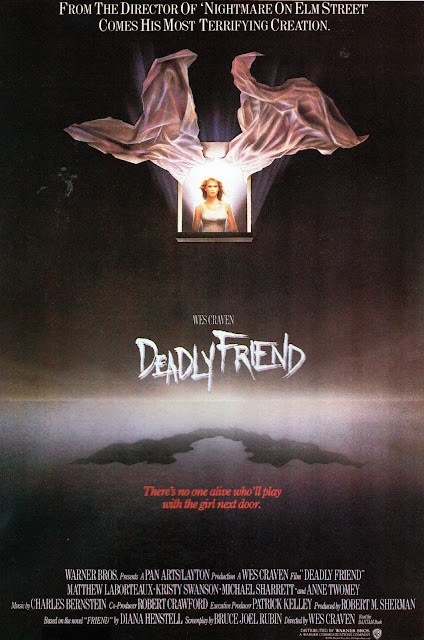 Hi, it’s B-B-B-Burl here to review Deadly Friend! This is the movie Wes Craven made after he had such a marvelous hit with his first Freddy movie, and presumably could make almost any movie he wanted to as long as it was a modestly-budgeted horror movie, and so that’s exactly what he did! Ha ha, but it’s kind of a weird one! BB!

The plot is a little bit ridiculous! There’s a nerdy brain wizard who travels with his single mom to live in the same backlot-looking neighborhood we see in movies like Fright Night and The ‘burbs! I almost expected to see the guy from Fright Night and his single mom walking down the street in the background! Anyway, this kid is so smart that he’s built his own robot, BB, who has been developing his own special set of values! BB looks and sounds like pretty much any other 1980s movie robot you can think of, particularly Number Five, and for quite a while Deadly Friend seems like another one of those robot or science lad movies, like Short Circuit, My Science Project, The Manhattan Project, Explorers or The Wizard of Science – but none of those movies have an old lady’s head exploding into mush from a basketball being thrown at it! Ha ha, BB!

BB gets blown up by Momma, the old lady who was in such 80s pictures as Class Reunion, and then a little bit later the brain wizard’s new girlfriend, Samantha, played by Kristy Swanson from Ferris Bueller's Day Off, is knocked down the stairs by her nasty drunk of a father and gets brain dead! Well, the young smartypants’s twin interests very conveniently dovetail here, and so he inserts BB’s 20 megabyte thought-chip into Samantha’s dead brain, and, you guessed it – BB! So it’s a lot like Frankenstein, and then of course there are some killings to be done, namely of Momma, the nasty father and a local bully, who gets tossed through the air by the teen reanimate! At the same time, the young paperboy whom the brain wizard has been relying on to be his Ygor totally flips out and shows himself to be nothing but a “craven” coward! So he gets shaken around by Samantha/BB, but not quite killed!

It doesn’t end well for Samantha or BB, or the young genius, who you’d think would be looking at some pretty serious time in juvy for his various crimes of bodysnatching, corpse outrage, secretage and accessory to murder! I wonder what happened to that actor, anyway – he was sort of a nerd, but his performance was pretty good, I thought! Samantha turned up as Buffy, and of course Momma played Momma in Throw Momma From the Train, and another momma in The Goonies, and she got a lot of accolades for those! And Wes Craven of course kept on making movies, some of them better than this and some of them even worse!

It’s a strange little movie, but I recommend tracking it down and having a look just because it’s so bizarre! Ha ha, in a weird way it might be one of the most 80s movies ever made! And is that a bad thing? Burl says no! I give it two flying bullies! BB!
Posted by Burl at 11:30

Email ThisBlogThis!Share to TwitterShare to FacebookShare to Pinterest
Labels: 1980s, Craven, horror, saw it on the big screen, sci-fi, scientist