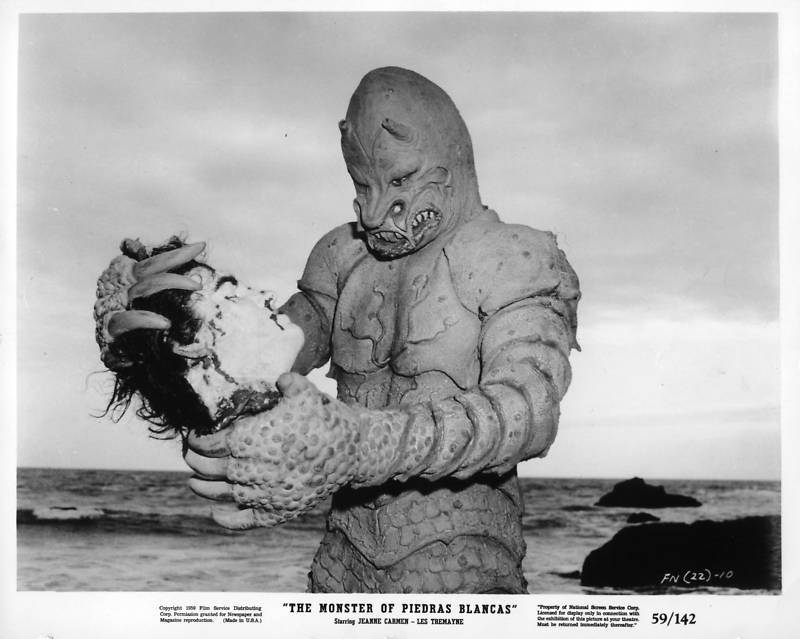 Ha ha, hi! Yes, it’s me, Burl, with a new movie review for you! For this one I wanted to go back, back, back in time to 1959, the days of beatniks and Ben-Hur, not to mention the space race and the Cuban Revolution! It was also the era when movies like The Monster of Piedras Blancas could be released with every reasonable expectation of being a marvelous hit!

I hear you saying “Ha ha, Burl! The Monster of Piedras Blancas? What’s that? Sounds foreign!” Well, I’ll tell you what it is! First of all it’s a domestic situation, definitely, and a pretty scary one too! It seems the little California coastal town of Piedras Blancas has a monster problem, and already the foolish Rinaldi brothers have been torn to shreds while carelessly fishing near the lighthouse! Kochek the garrulous storekeeper with the indeterminable accent is pretty sure that it’s that gosh darn Monster, up to his old tricks as described by myth and legend! But Kochek gets the scoff from everyone, from the local cop to the doctor, to the young scientist and his sweetheart, and most especially he gets it from the surly lighthouse keeper who keeps a little secret of his own!

Of course Kochek is soon proved right, but at the expense of his life! The Monster from Piedras Blancas, which looks like the Creature from the Black Lagoon’s second cousin twice removed, shuffles into Kochek’s shop and pulls his blabbermouthy head right off! Ha ha, he never even gets a chance to say “I told you so!” But the expression on his head as the Monster carries it away kind of conveys that sentiment anyway! Anyway, the carnage continues, and it’s up to the townsfolk to come together as a community and try to vanquish the hideous beast before he gets all of their heads off!

Ha ha, I really love The Monster From Piedras Blancas! It’s just a little creature cheapie from the 1950s, but it captured my heart the first time I ever saw it, which is years ago now! I don’t know what it is about the darn thing, but I guess it might have something to do with the smalltown coastal atmosphere, the shocking moments of gore, the marvelous summer-stock acting, the great monster and the desolate and windswept black and white photography! And don’t forget the limpy kid who finds the headless Kochek and runs all the way up the hill to the Rinaldi brothers’ funeral to let everybody know! Ha ha, he’s wonderful!

Kochek is great too! I don’t know who that actor is, but if he was around now I’d put him in a movie myself! His thespian stylings really run the gamut, and I like how, even as a helpless decapitate, Kochek is still grimacing at people and letting them know what he really thinks! And on top of it all, Les Tremayne, Snakey himself from Holy Wednesday, is in the picture, furrowing his brow deeply as the town doctor!

I give The Monster From Piedras Blancas three orders of lens cleaner and an extra ha ha for the taut climax at the lighthouse! If you’re able to track it down, you’re in for a fine and frolicsome night at the movies!
Posted by Burl at 13:05