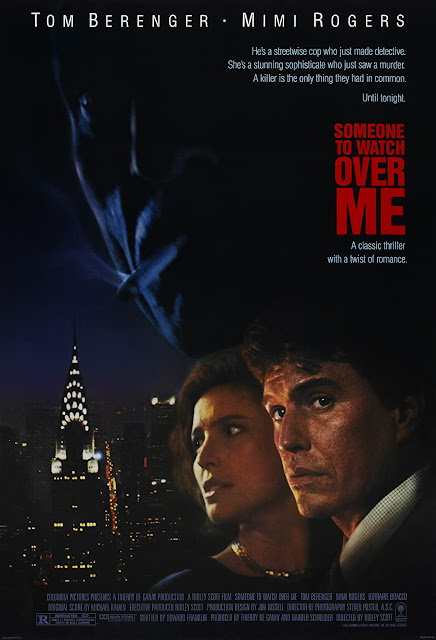 Hi, Burl here with a review of a glossy late-80s cop movie of the kind I’d forgotten even existed! It’s called Someone To Watch Over Me, and it was Ridley Scott’s fifth feature film, and his first set on planet Earth in the present day! Of course by now, with its high-toned 80s sensibility and excessive use of Fine Young Cannibals music, it seems as exotic and otherworldly as The Duellists, Alien, Blade Runner or Legend ever did, ha ha!

Anyway, the movie starts with a cop in Queens having a party to celebrate his promotion to Detective of Manhattan! At the same time, on the island itself, a socialite (there’s really no other name for her) is at another party, the kind where you suspect to see people bent over big rails of coc*ine around every corner; and the party is ruined when an evil-faced guy stabs another fellow while the socialite watches! It was some dispute about art paintings, but ol’ Burl didn’t really catch the details!

So Mike the detective gets his first assignment: protect the socialite from Mr. Evil until she can identify him in a lineup! Well, the main part of the movie shows how Mike, who has a nice wife at home and a vile little kid, falls in love with the socialite, who lives in an incredibly vast penthouse suite without any discernible source of income! I have to say that Mike does not show particularly good instincts or sense, and really when you get down to it, the movie is essentially about a bad cop who acts with a ridiculous lack of professionalism and becomes a truly lousy husband in the process!

But of course, this terrible policeman is still presented as the hero, even though it’s his wronged wife who really ends up saving the day in the end! I won’t go into detail in case you ever want to watch the movie, but I’ll just say that I didn’t really feel too terribly well disposed toward Mike by the climax of the picture, and even less so at the end after a really contrived and unconvincing reconciliation scene!

Maybe the movie seemed at the time to be everything it thinks it is: stylish, exciting, morally complex, provocative and er*tic! But now it feels more like a by-the-numbers TV movie with an amiable but unlikeable lead, a tortoise-like pace, clichéd characters and ludicrous styling! It’s the sort of movie where a socialite will typically spend her evenings alone sipping champagne from a long-stemmed glass and listening to Delibes while staring pensively out her high-rise window! Is that what you socialites really do, or is it only when your lives have been threatened by men so cartoonishly evil they seem to have been genetically created in a lab for the purpose, ha ha!

I should have known Someone To Watch Over Me would be trouble when it opened with Sting singing the Gershwin standard of the same name! I’d almost prefer the Sousa marches from Holy Wednesday again! Anyway, I give this picture one Armani necktie and declare it to be the sort of movie you watch and then ask yourself “Why, exactly, did I bother to watch that, anyway?” Just about any other film would be Something To Watch Over This! Ha ha!