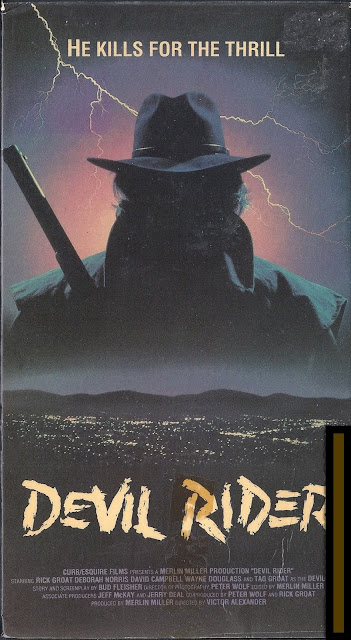 Hi-yo and ha ha, it’s Burl, here to review a horror Western! This one is called Devil Rider, and it fits into a long if sporadic tradition of sprinkling horror into the common oater! We’ve seen this in movies like Billy the Kid Vs. Dracula, Jesse James Meets Frankenstein’s Daughter, Jack the Ripper Goes West, The Shadow of Chikara, Ghost Riders, Ghost Town, Dead Birds, The Burrowers, and Bone Tomahawk! And there are others too, so you can see there’s no shortage, ha ha!
Devil Rider gets a little lost among all these titles, and with good reason: it’s not terribly good, or memorable, or the least bit scary or thrilling! That doesn’t mean there aren’t some nice things to say about it, though - ha ha, I never want to be an all-negative nellie! No, I’m sure that if I give it some good old-fashioned pondering, something admirable will show itself! Or, on the other hand, possibly not, ha ha!
Now, you’re saying “Ha ha, Burl, but what’s the story?” Well, we start in old western times, where a homesteader is banging his stake! A big grumpy cowboy shows up, and, after some rasslin’, the big grumpus spears the homesteader with his sabre! Ha ha, this meanie is the Devil Rider of course, and he claims a bunch of victims right away, like the homesteader’s wife (who is bathing Pigkeeper’s Daughter-style) and a nearby gang of prospectors! And of course, grumpy as he is, he doesn’t forget to issue regular laughs as he conducts his reign of terror! A posse catches up with him and the next thing you know he’s dangling from a rope, but not dying! They shoot him, yet still he laughs!
Tiring of this he pulls off the noose, and the next thing you know it’s a hundred years later and his territory has become a dude ranch in the process of being invaded by a horde of ill-tempered yuppies! The leader of the yuppies is a reincarnation of the pole-smacking homesteader from the beginning, and he’s dragged his friends along to convince them to invest in the place as some kind of dude ranch hotel or something! Ha ha! And off to the side is the requisite old doom-crier, grooming horses and grumping about durn fools!
Of course the Devil Rider shows up, his duster unblemished from his years in Tartarus or wherever, and begins anew his campaign of shootin’, pokin’, and hackin’, along with a draggin’ or two! The most objectionable of the yuppies is Buddy, played by David Campbell, known from prior appearances in Deadly Prey and Killer Workout, as well as his role in Scarecrows! He lasts a surprisingly long time before succumbing to the depredations of the Devil Rider! Finally, after a head-chopping with his own sabre - the only way to get rid of this homely, bearded menace - the Devil Rider is slain! Ha ha, or is he? The picture ends with a headless horseman and the sound of that old familiar heh-heh-heh!
Devil Rider, as noted, is not a good picture! There’s no art to the filmmaking, no apparent attempt to make the goings-on scary, and not much else to fall back on, like gore or vim or pep or style! There’s a fair bit of carnage but not many Special Makeup Effects, except for the head-chop and a scene in which the Devil Rider flays one of his less fortunate victims with brands of fire! But even in these scenes, vim, pep and tomato paste are kept to a minimum! If only they had worked harder to make the Devil Rider a scary, mythological figure rather than just showing him constantly in full daylight, showing him off to be just a burly guy in a long coat! Ha ha! I’m going to give Devil Rider one single groat, which is half the number of groats we find in the film itself!