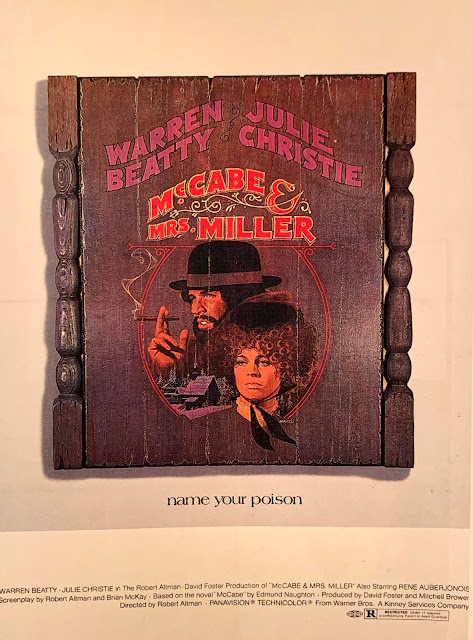 Oh sweet wingalls, it’s Burl! Ha ha, I’m sorry I’ve been so sporadic with my reviews lately - I’m hoping to ramp it back up a bit, or at least avoid a Great Interruption such as we experienced in 2016-19! In the meantime, here’s a review of a movie I’ve long enjoyed, from a director who has brought us many fine films! I’m talking about Robert Altman, whose marvelous The Long Goodbye we all adore; and this picture is his stab at an oater (well, his first one anyway), McCabe & Mrs. Miller!

Warren Beatty from The Parallax View plays McCabe, a wandering cardsharp who strolls into the nascent town of Presbyterian Church one day and espies an opportunity! He’s got a completely unearned reputation as a fearsome gunfighter, which he promotes so as to avoid conflict, and a businessman with an eye for the main chance, but he’s otherwise a fairly small-minded and dim fellow! Nevertheless, he sets up shop as the town pimp, and is soon doing a steady if small-scale business!

The town is populated by Altman regulars like Rene Auberjonois from the 1976 King Kong, John Schuck from Butch and Sundance: The Early Days, Bert Remsen from Fastbreak and Lies, and of course Shelley Duvall from The Shining! Ha ha, and the Iron Buffalo himself, Don Francks from Fast Company and My Bloody Valentine, is in there too! But now along comes Julie Christie, well known from Demon Seed, in the role of Mrs. Miller, and she’s a much savvier cabuncas than McCabe could ever be! She persuades the bearded chancer that when it comes to brothels, bigger (and cleaner, and nicer) is better!

That’s all well and good until some big-business reps, played by Michael Murphy from Phase IV and Shocker and Antony Holland from Housekeeping, come to town with an offer to buy out McCabe and Mrs. Miller’s business! McCabe, being a dimwit, makes fun of them, offers outrageous counteroffers, and then just ignores them, and in one of the moments that crystalizes this picture’s themes, the pair casually decide to leave future negotiations to another group - ha ha, a group of hired killers! Thus is the soulless ruthlessness of big business robber baronry expressed!

Well, the rest of the picture has McCabe slowly realizing the pickle he’s got himself into, and we realize it too once the killers have arrived in town and, just for sport, plug a friendly, innocent, horned-up young cowpoke played by Keith Carradine from Mrs. Parker and the Vicious Circle! McCabe visits a lawyer played by William Devane from Rolling Thunder and The Dark, but he’s no help at all, and finally, in a shoot ‘em up climax it’s just the lone would-be businessmen against the rapier’s edge of the business world!

Ha ha, with its snowy oater vibe and Leonard Cohen songs and its fantastic dirty verisimilitude, this picture is a true pip! It’s quite funny too, as movies with dopey main characters often are, and, being a movie about a man who turns out to be dumber than we thought, it makes a nice contrast with The Long Goodbye, a movie about a man much smarter than he first appears! Boy, Robert Altman sure made a lot of good movies in the 70s! McCabe and Mrs. Miller is surely one of them, and I give it three and a half wisps of opium smoke!