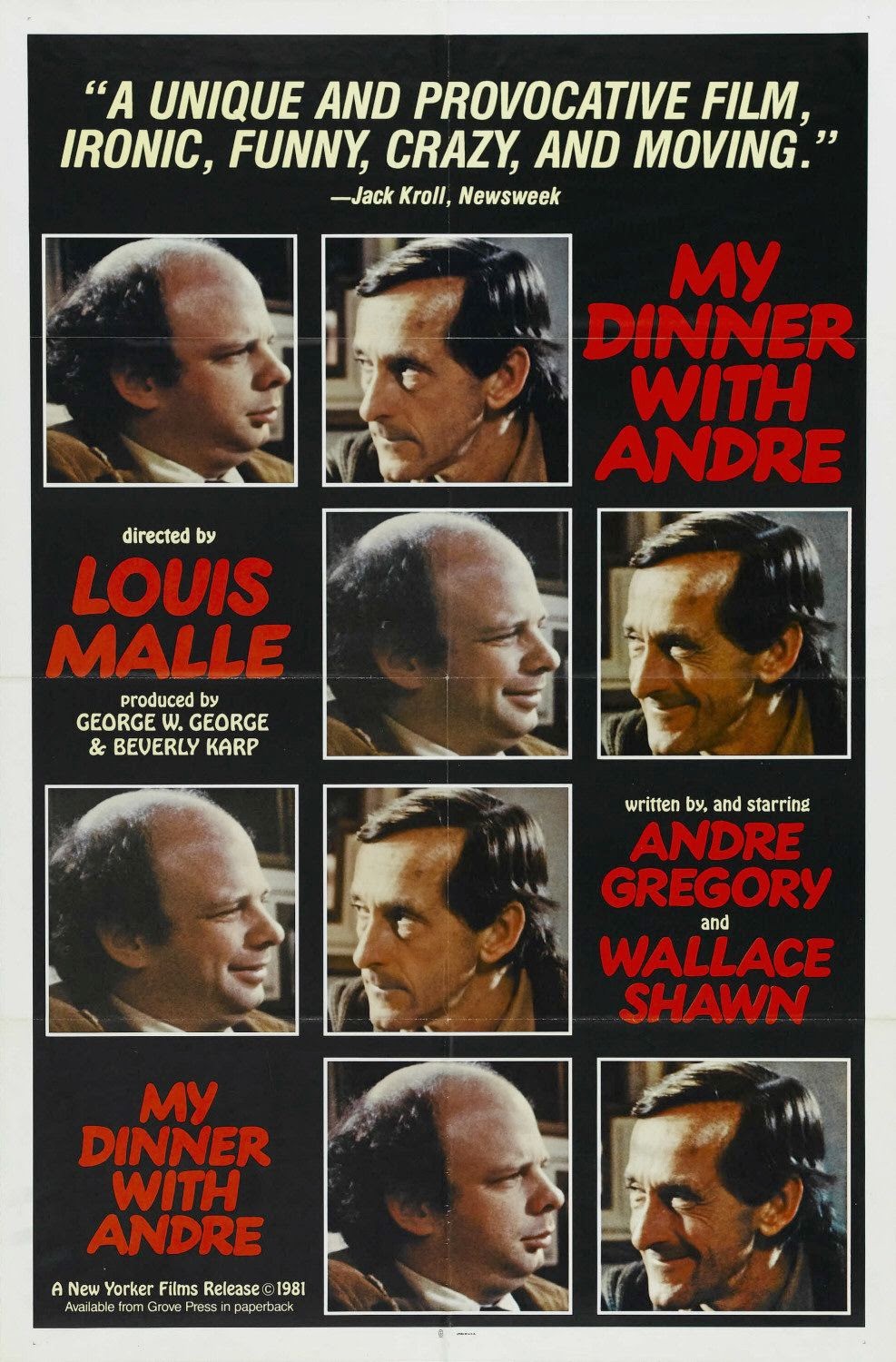 Hi, Burl here to review cinema’s preeminent gabfest, My Dinner With Andre! Of course, everyone knows the plot of this one: Wally, a squat and balding playwright, meets up with his old friend Andre, a former theatre director, for an evening of quail and conversation at a tony New York eatery! Then they have coffee and go home!
It reminds me of a similar movie, My Breakfast With Blassie, which took place on the other side of the country, but was in many respects virtually the same picture! However, this one came first, and of the “My [Meal] With…” projects, it’s undeniably the best! That’s probably because it was put together by not just the two diners, Wallace Shawn (whom we know so well from The Princess Bride) and Andre Gregory, but a director I really admire, Louis Malle! One of these days soon I’m going to have to catch up with Malle’s Vanya on 42nd Street, which I understand has many similarities to this enjoyable picture!
I saw My Dinner With Andre years ago when I was but a callow youth, and enjoyed it, but watching it again recently was quite a different experience now that I’m a little further along in life! It’s not that I understood it more than before, but I could connect a little better with some of its themes, notably the difficulties in achieving some true communication with another person, and the way modern life – all the more so now than in 1981 – seems to conspire to keep us in a sort of zombified dream state!
I’d forgotten how freighted the relationship between Wally and Andre was! I remembered them simply as close friends, but had forgotten they’d been estranged by Andre’s self-removal from the theatre world and his subsequent strange behavior! I was surprised at Wally’s opening narration where he describes how nervous he is to be seeing his friend again, and how he’d rather be doing almost anything else!
And I had also forgotten (well, actually never realized) that this is basically a Troma film! Ha ha! Lloyd Kaufman was the production manager, and Troma facilities were used in the making of the picture! It’s certainly a bit of an anomaly in their catalogue! But it has some of the same grimy 16mm photography and, at the beginning, some familiarly decrepit SoHo locations as we see in many Troma quasi-classics!
I really enjoyed the picture this time around, and found it had a comforting, lulling effect that was really pleasant, even when the two men are disagreeing or failing to connect! Even though Andre is clearly in pain and Wally is too, at least by the end they each can recognize that the other doesn’t really understand him, and that is better than being stuck in the dream fog of daily life! I was never in total agreement with either fellow, but that didn’t lessen my enjoyment of the movie!
I give this noteworthy motion picture three fiercely blinking waiters!
Posted by Burl at 11:43