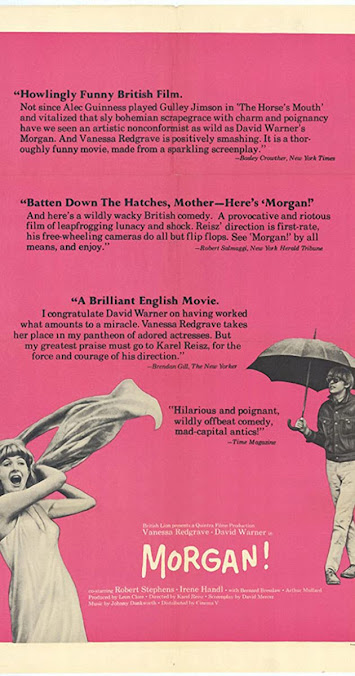 Hello friends and sweet draculas, it’s Burl, here to review a picture from the Great Swingin’ 60s in Old London Town! Ha ha, I took a course once in postwar British film, and we saw some Ealing works and pictures like The Fallen Idol, but then we moved into the Dishpan Hands Era, which is to say Britain’s own New Wave, and were treated to gritty slices of life like Room at the Top, Billy Liar, Saturday Night and Sunday Morning, and so forth! But we never got to this movie, Morgan - A Suitable Case For Treatment, which was made by Karel Reisz, the same director who brought us Saturday Night and Sunday Morning, and, later, the oddball Everybody Wins!

Morgan is the tale of Morgan, a painter who hasn’t painted anything in a long time, and has instead been going crazy! David Warner from Nightwing, The Island, The Man With Two Brains, and many others, plays the part, and does it with at least some of the sensitivity a movie about mental illness would seem to demand; but remember, ha ha, this is 1966, so at some moments Morgan’s crazy behavior is simply there for us to laugh at! His frequent daydreams of stock animal images sit somewhere in between!

This was Warner’s big break, and he delivers a roller-coaster performance that renders Morgan a fully dimensional human while still extremely annoying! Vanessa Redgrave from Mission: Impossible, The Devils, and Blow-Up, plays his exasperated ex-wife Leonie, who at times displays what I can only describe as a superhuman tolerance for Morgan’s antics! Robert Stephens from The Asphyx and The Shout plays Leonie’s new boyfriend, Charles Napier, who was also Morgan’s gallerist and friend, once upon a time! But now Morgan is always busting into his office and threatening to kill him, or simply scrawling “Charles Napier Go Home” on the back of a painting!

Ha ha, that delighted me when I saw it, because I at first assumed he was referring to Charles Napier the actor, who hadn’t even entered the Russ Meyer stage of his career at the time of this movie, and was still a long way off from Jonathan Demme and Rambo! Irene Handl from Two-Way Stretch and The Wrong Box plays Morgan’s ardently Marxist mother - ha ha, a character type I frankly adore! You’ll no doubt recall the similar Aunt Sonya character in The Big Fix! She has Morgan take her to Marx’s grave on his birthday, and despairs of his union with Leonie and her very bourgeois family! Morgan, too, is a Communist, and really, that‘s one of his most admirable traits! He’s got emotional problems and is frequently in distress, but he’s also extremely selfish!

The film follows Morgan’s efforts to win his ex back, and though he comes close to it at least once, Leoni ultimately marries Charles Napier (ha ha!) instead, and this is what puts Morgan farther ‘round the bend than he’s ever been before and lands him, in fact, in the bughouse! But you still come away convinced that you’ve seen a happy ending!

Ha ha, it’s a pretty enjoyable picture, with nice black and white imagery, jumpy New Wave-y editing, solid performances, and some laffs! Morgan himself never became an appealing presence, but I could hardly doubt the sincerity of his pain! That he kept it together long enough to get married is astonishing, and the gorilla suit finale feels inevitable! Ha ha, I give Morgan - A Suitable Case For Treatment three big knit jumpers!