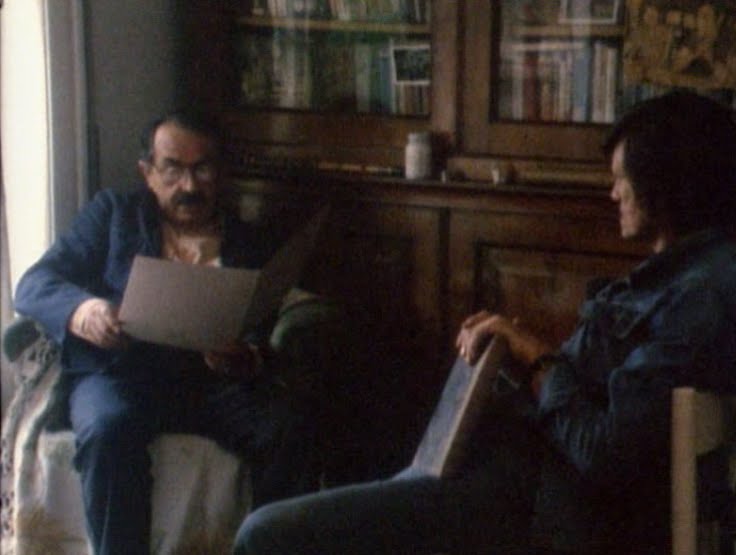 Hi, Burl here with a new review! This one is of Voyage in Time, a documentary made for Italian TV by none other than Andrei Tarkovsky! Ha ha, I love Tarkovsky’s movies! I was hooked when I saw Andrei Rublev, and then later I watched Mirror again and again! I might have to watch that one again soon, actually!

Voyage in Time shows us Tarkovsky hanging out in Italy with the screenwriter Tonino Guerra, who wrote a bunch of Michelangelo Antonioni movies, as they work on the screenplay for Nostalghia, a movie I’ve never seen! Well I’m going to have to catch up with it now! They travel around Italy, and their voyage is captured on film by the great cameraman Luciano Tovoli, who shot Dario Argento’s fine witch picture Suspiria and his gore-mystery Tenebrae! He also shot Antonioni’s The Passenger, and, of course, Single White Female!

The dynamic between Guerra and Tarkovsky is pretty funny! Guerra keeps taking Tarkovsky to all these beautiful tourist spots along Italy’s southern coast, and with each gorgeous, historic spot the Russian helmer gets more and more grumpy, complaining that he feels like he’s on holiday instead of working! Ha ha! He doesn’t want to see all these tourist spots, and doesn’t think their as-yet unnamed character from their as-yet unnamed movie would be in such places either!

But Guerra’s answer to this is a good one, I think! He tells of an old master artist who lived nearby, and how the artist was teaching some students, and gave them each an iron ball to hold in their hand! With their other hand he asked them to draw a circle, and they did; but these were not simply circles! They had slight spherical qualities to them, or the ghost of a sphere, as though drawn from the balls held in the other hands! Guerra agrees that they will not be shooting their film at any beautiful historic locations, but that this Italy, the Italy of song and story that he himself loves so well and considers essential to the story, will appear subtly in the film nevertheless, now that, having visited them, Tarkovsky can hold them in his brainpan like the master's balls were held in the art students’ hands! Ha ha!

There are several scenes in the movie where Guerra reads letters sent by film enthusiasts, asking questions of Tarkovsky, like what advice he would give young filmmakers and what directors he himself admires and has learned from! I loved those scenes! Just hearing one master director talk about other ones that he likes gave had me feeling pretty good! He makes reference to Dovzshenko, Bresson, Vigo, Antonioni and Fellini, and another Russian director I was unfamiliar with!

On top of all this are some beautiful shots of Italy, both of the picture-postcard variety and of details, such as the courtyard of a monk’s cloister filled with purple hydrangeas or steam rising off a pool at sunrise! But these delicate moments are a part of the film’s largely unintentional elegiac atmosphere, as of course we now know that Tarkovsky had only two films left in him at that point, including the marvelous The Sacrifice, before he would die of lung cancer in 1986!

It doesn’t come up in the film itself, but it was only with great difficulty that the Soviets could be persuaded to let the director, whose movies they didn’t even like that much, out of the country to do this trip at all! No wonder he didn’t want to waste time doing tourist stuff! And of course he was missing his family terribly! It’s a melancholy tale, but very much worth watching, and I give this pastoral little journey three and a half poems in dialect!
Posted by Burl at 16:09