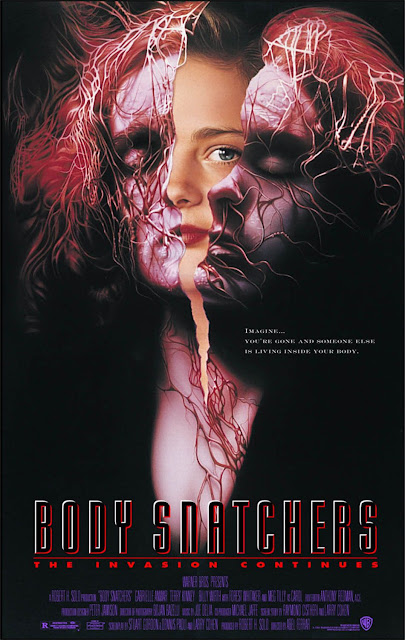 Once again, it’s the actual Burl and not an amazing facsimile, ha ha! Really, I promise; but after reviewing yet another adaptation of the sturdy and always-relevant Jack Finney story about drifting moss from outer space that absorbs people and recreates them as emotionless simulacra, I can understand your doubts! This time the director behind it all, somewhat surprisingly, is the auteur behind Fear City, Abel Ferrara, and, reflecting the streamlined approach, his version is called simply Body Snatchers!

The Don Siegel picture was set in a small town, and Philip Kaufman’s excellent remake, Invasion of the Body Snatchers, took place in the big city, but this one is laid on an army base, which turns out to be an extremely apt location even if the movie doesn’t exploit it to its full potential! On the other hand, if they’d pushed the dehumanization inherent to the military too much, it might have seemed preachy or at least overbaked, so maybe Ferrara and his screenwriters (including Stuart Gordon, who was originally supposed to direct it, I believe) got it right!

We join a non-military family as they arrive at the base: dad works for the EPA, and is not a supercilious bureaucrat like the EPA guy in Ghostbusters, but a shaggy ex-hippie type; mom, or rather, stepmom, is played by Meg Tilly from Psycho II and Impulse (and who's particularly effective once she turns counterfeit); and there’s a teenage daughter who’s more or less the main character; and then there’s a little guy too, maybe five years old, played by one of the best child actors I’ve ever seen! Ha ha, he’s really terrific! Ferrara must have liked him too, because he used the young chap again in his next picture, the Madonna vs. Harvey Keitel one that I've seen, and completely forgotten, called Dangerous Games!

Anyway, one guy on the base who sure hasn’t been taken over yet is the post’s chain-smoking doctor, played with much nervousness by Forest Whitaker from Ghost Dog: The Way of the Samurai! On the other hand, R. Lee Ermey from Full Metal Jacket is the commanding officer, and there’s no discerning that guy from a pod version, is there, ha ha! Billy Wirth from The Lost Boys plays a sympathetic soldier who becomes a co-hero along with the girl!

As always when I see little kids in horror movies, I dreaded what might happen to the little brother; and indeed one of the most effective scenes in the early part of the picture has him becoming heartbreakingly alarmed when every other kid in his classroom has made the exact same finger painting! You can see it in the eyes of this fine little actor: the dawning awareness that his own very different painting has made him an object of suspicion and maybe even of attack from his zomboid classmates!

While it’s no House By the Cemetery, my worst fears for the young character were indeed realized, though his part in the tale is wrapped up with the goofiest plummeting effect since Link, so that eased my anguish a bit! Of course there are no happy endings in the pod stories, but this version does present a little bit of payback before the inevitable! Ferrara keeps it all moving quickly, and orchestrates a few decently suspenseful or suitably gross spaghetti sequences, and thanks to cinematographer Bojan Bazelli, who shot The Ring and Pumpkinhead, the picture looks pretty good too! It’s not up to the standards set by the first two cinematic adaptations, but it doesn’t embarrass them either; and it’s better than The Puppet Masters, and almost certainly better than the more recent official adaptation of the Finney story, simply called The Invasion, which I’ve not seen and currently have no plans to! I think three solid versions is enough for me, and so I give this one, Body Snatchers, three solid versions!