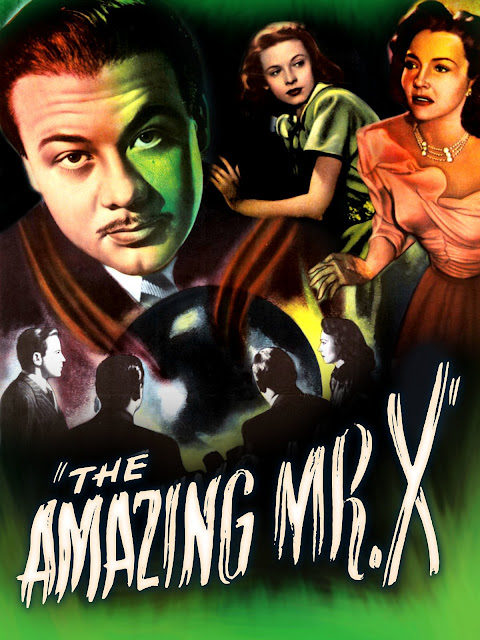 Hi, Burl talking at you! Ha ha, it’s time to review a marvelous discovery, the 1948 fake mystic picture The Amazing Mr. X! It’s part of a long line of phony spiritualist pictures, which is a particularly touching subgenre as they tend to be very popular during and for a few years after a major world war! This is because there are at such times an awful lot of bereaved people desperate to contact loved ones who have died far away, and no shortage of charlatans willing to take advantage of their pain!
Christine, the protagonist of this picture – well, sort of – isn’t a war widow, but as the story opens her husband has been dead two years, ever since he drove his car off a cliff! Christine is a very rich lady, and she has a younger sister and a foursquare suitor who’s just popped the question! However, this is when she starts hearing mysterious voices on the beach, and runs into local medium and all-around mystic Alexis, played by that dashing foreigner Turhan Bey! After that, with the help of Turhan, her life tumbles into confusion as she falls into a web of fake spiritualism and, later, a twist that’s shocking even to the suave séancer! Ha ha, I won’t reveal the twist here, but it’s a good one!
This has just got to be Turhan Bey’s finest hour! He’s so smooth in this picture you could spread him on toast, and even when he does a little thing like take a cigarette from a case, he does it with such panache that you wonder why he didn’t achieve Valentino-like heights of romantic superstardom! Well, it could still happen – Turhan still walks among us, and there may well be some enterprising director out there with a great role for this underappreciated thespian!
This is a pretty enjoyable movie, just dripping with the greatest post-war SoCal atmosphere you ever saw! It’s got a bit of a noir feel – after all, it was photographed by the great John Alton, ha ha! – and in many instances, such as the terrifying sequence when Christine’s wedding dress comes to life and chases her around the room, it’s a full-on horror picture! The greatest of all though is getting a look into the crazy tricks employed by the phony medium, whose house is rigged for all sorts of ghostly surprises!
Just as Phantom of the Rue Morgue featured a zoologist-psychologist, so this movie gives us a great professional mash-up: the magician-detective, played in this case by a real magician, the Ricky Jay of his time I guess, who performs some very impressive sleight-of-hand in his pursuit of the fake fakir! And the guy who plays – well, I’d better not reveal who he plays, but it’s a character who shows up about two-thirds of the way through the movie – but that guy is just about the best bad-guy actor I’ve ever seen! It sure raises some questions about the judgment of our main character though; but then again so does almost everything else in the movie, mainly how quickly and completely she falls for the spiritualist’s bafflegab!
That would probably be my main criticism, along with the number of loose threads left at the very sudden end of the movie! But that’s a very minor complaint, dwarfed by the titanic virtues offered by this electrifying motion picture experience!
Ha ha, I know I’m all over the place with this movie review (and I haven’t even mentioned the amazing trained crow or the incredible tumbling-down-the-cliff scene!), but the upshot is that you should track it down and check it out if you can! Ha ha, congrats to Bernard Vorhaus, the director, with whom I was previously unfamiliar but whose other movies I will now be looking avidly for you can bet! You’ll really enjoy The Amazing Mr. X, I predict, and for every person who follows my advice to watch it, a new Turhan Bey fan will surely be born! I give this moody and marvelous picture three and a half futuristic security cameras that turn into paintings with the mere swipe of a finger!
Posted by Burl at 12:05