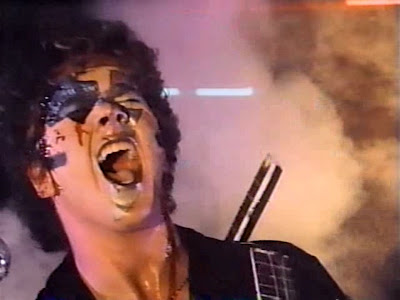 Hi, Burl here to review a rockmaniac movie called Rocktober Blood! Ha ha, I realize it doesn’t seem like that title makes a whole lot of sense, but in fact the movie is indeed set in October, and it does involve rock! Also there’s some blood, so I guess it is the perfect title after all!

The movie opens with an old-fashioned recording studio massacre, as Billy, an unpleasant heavy-metal star of dubious skills, apparently goes bunyip and starts hacking up his associates! His bandmates, his recording engineer, everyone gets the chop! He almost finishes off his sometime girlfriend/backup singer too, but his little cutting project is interrupted just in time!
Two years later, Billy has been executed for his crimes and the backup singer has used his terrible songs to become a star in her own right! But presently it seems as if Billy has donned a Halloween mask and returned from the grave! The backup singer goes to relax at the lake with some of the ladyfriends of her entourage, but soon the trees are talking to her and Billy seems to be lurking in every shadow!
This is the sort of movie where somebody says “Ha ha, get the Lear jet ready, we’re flyin’ her to the lake!” and then it cuts right to the lake, where the never-seen Lear jet has supposedly deposited her! Ha ha, okay fellows, we believe you had a jet, but the demands of narrative economy merely prevented you from showing it in action!
That’s kind of a churlish thing to say, so my apologies! I well understand the difficulties in stretching a small budget, believe me! But even a small budget doesn’t preclude a little style, a little bit of directorial panache, and “style” in this film is limited to the near-constant use of a four-point star filter! Ha ha, that does get a little tiresome after a while!
The very bad rock music also becomes a little enervating! Believe me, Burl likes to rock, but not to this hairspray nonsense! Well, that’s just the way it is with these heavy-metal horror pictures – the music in Rock n’ Roll Nightmare, Black Roses and Terror On Tour is no better! And here I am being churlish again – I should just be impressed that such low-budget movies are able to muster any original rock music at all!
Anyway, there’s more hacking and slashing and hot-tubbing and aerobics and plenty of rocking and rolling, and there’s a twist ending I won’t reveal except to say that it involves a previously unmentioned twin brother! And I also have to mention that the rockmaniac in this movie is the most supremely punchable guy I’ve seen in any movie in a long time!
This is an extremely bad movie, but for its laffs and its hot-tubbing, I give it one single ape-skull mask!
Posted by Burl at 11:00