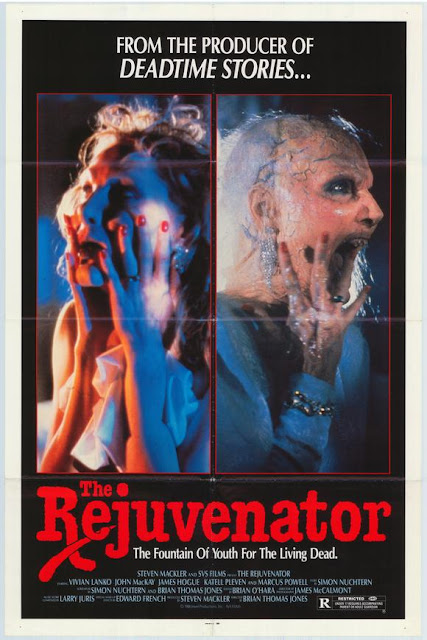 By headbulbs, it’s Burl! I’m here to review another gloopy monster mess from the 80s, ha ha, that breed of picture I love so well in some strange way! These rubber classics usually have a lot of goo in them, a little to a lot of blood, and maybe a creature or two! From Beyond might be the exemplar of the form, or maybe Evil Dead 2, but there are lower shelves too, where you find The Kindred and The Outing and Night Beast and C.H.U.D.!
Well, I’d seen all those in my teenage movie watching years, but never caught up with The Rejuvenator, which is the picture I’m talking about now! I've always been a bit cuious about it - the fact that it had a credit for Special Makeup Effects on the VHS cover was, I believed, an auspicious omen! And indeed, Ed French, who got the makeup effects credit, certainly must have put in some extra hours  on this one, so bra-zos, French and crew, bra-zos!
For this is by all means an effects picture, or at least it becomes one rather late in the game! Our situation is simple: an obsessive scientist and his assistant are working on a youth serum in a lab filled with TVs, and the TVs and everything else are funded by a rich Norma Desmond-type lady, who declares she’s sick and tired of waiting around in her big richlady bed and she wants the operation NOW! The doctor, who exhibits slightly more principle than most mad scientists of this type, warns of certain dangers, but an angry dowager ultimatum is made! (The old version of the lady is played by Jessica Dublin, who played a similar rich lady who gets her head chopped off by a bulldozer in that unpleasant Greek picture Island of Death! She was also in Fellini Satyricon, Visconti’s The Damned, and several Troma films! Ha ha, what a career!)
Of course the operation at first appears to be a success, and the elderly doyenne emerges from her bandages as a pretty younger lady! In celebration the rejuvinatrix and her doctor enjoy a romantic date in which they dance to circus music as first petals and later sparkles rain down upon them from the sky! Then the doughy doctor gets a boob-grabbing love scene with his patient, ha ha, as the vaguely Germanic manservant, the sort of butler who wears a nightdress to bed, glowers in the corner!
But right away after it’s back to the lab for the doc! “We’ve got to find a way to synthesize the serum!” he cries several times to his ladynerd assistant, Stella! (Stella is tall and serious, and talks to herself a lot, and of course nurses a crush on her fiveheaded boss; and by the third act I was a bit in love with her! Ha ha!) The rejuvinatrix regresses, but she doesn’t turn back into the old lady, but into a brain munching creature! For you see, the serum comes from human brains!
The story ostensibly comes from Simon Nuchtern, who brought us Silent Madness, but really it comes from Roger Corman's 1959 picture The Wasp Woman! Ha ha, it’s not an original tale! But it’s told with some occasional style, thanks to the blue gels the cinematographer was sure to include in his kit, and to some nicely chosen locations! Opportunities for real suspense and horror are largely squandered however, and the picture spins its wheels for a long time, with repetitive scenes of the doctor working in his lab or receiving unwelcome visits from Dr. Germain! Dr. Germain is played by an actor who might be the poor man’s Edmund Purdom or Dan O’Herlihy, but still delivers one of the most on-point performances in the picture!
By the last act the carnage begins! The rejuvinatrix goes out to a club to see the Poison Dollys (an all-girl band, like L7 if L7 were terrible!), where she dances and develops a case of grosshand! Next thing you know she grows a giant purple brain and goes on a rampage: slashing a nurse, ripping through an orderly, twisting the head off a nosy security guard and popping the top off of Stella’s head as though she were a bottle of cherry soda! Finally her big head goes slimy-berserk and starts firing pus everywhere! Ha ha!
It’s a picture that suffers from many debits: poor scripting, hacky editing, mostly indifferent direction, a pep-free first hour! But it livens up toward the end, and there’s some ambition on display throughout, for which the filmmakers are to be commended! It couldn't be more a product of 1988 if Dan Quayle had a cameo, and I give The Rejuvenator one and a half inflating faces!