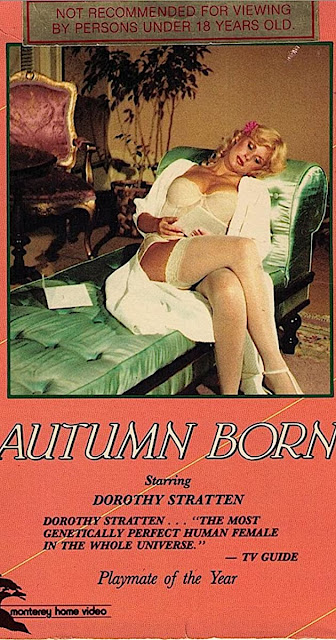 Hi, Burl here with a sexual obscurity to review for you! This movie’s called Autumn Born, and it features the late Dorothy Stratten as a spoiled heiress named Tara who wants only to shop for clothing and disco dance at Bogart’s, but is kidnapped and enrolled against her will in a school of sexy discipline!
Tara’s actually a pretty unpleasant person at the beginning of the picture, but Dorothy Stratten manages to give her a sort of innocence that makes you want to root for her anyway! It helps that everyone else in the film, from Tara’s gross Uncle Grant who engineers the kidnapping so that Tara can never get her hands on the family company, to Veronica, the headmistress of the discipline school, to the pair of disciplinarians who torment the heiress for most of the running time, are even worse!
The only decent character is Monica, a.k.a. Eyebrows, who works at the shop where Tara buys her clothes! She cuts Tara a break when the evil uncle cuts off her credit, and allows the orphaned heiress to leave the store with $1900.00 worth of smockery! Tara says “You’re a really nice person!” and takes Eyebrows disco dancing at Bogart's, where a guy in a silver suit who looks like John Waters crossed with a nerd demonstrates his moves! But that’s also where the evil bearded Phillippe and his nasty, sadistic lady companion show up to spirit Tara away to Punishment Mansion! Eyebrows does some sleuthing around about the disappearance, but this hirsute Nancy Drew eventually comes to a sticky end at the hands of El Beardo! That subplot really made me sad, because while she was no great shakes as a detective, Eyebrows was still a really nice person!
Tara’s torment comes in many forms: whippings, beatings, sleep deprivation, weird sounds and music, rape, unfortunately, and a small toy mouse which is given to her as a friend and then cruelly smashed before her eyes by the beardo! It’s a pretty depressing and seedy series of events actually, though at least the rape is not really shown for more than a moment! I really don’t like those type of scenes very much I have to say, so the inartful fade to black was a real relief!
The ending is depressing too! I won’t go into it unless somebody asks in the comments below, but there’s at least a bit of a twist which involves the punishment of Uncle Grant! Ha ha, that guy deserves it! It’s when you think of what happened to poor Dorothy Stratten in real life that the movie achieves a whole new level of grotesque horror! But I’d rather concentrate on the positive, which is that the movie also contains some evidence that if she’d had a chance, she could have become a fine actor!
What I did like about the movie was how weird it often was! The toy mouse scenes were strange enough, and the silver-suited disco-dancing nerd, and the oddball bell-jar acting styles from just about all of the cast, but then there are some other crazy touches, such as the fact that the bearded guy’s voice pops up as narration every now and again, even though he’s a decidedly secondary character!
But it’s mostly pretty bad, and like I say, somewhat depressing! Ha ha! For the weirdnesses, though, and the fact that, again, Dorothy Stratten had quite a bit of potential as an actor if you ask me (and of course was mighty pretty!), I give this rare motion picture one brutal spanking!
Posted by Burl at 17:10