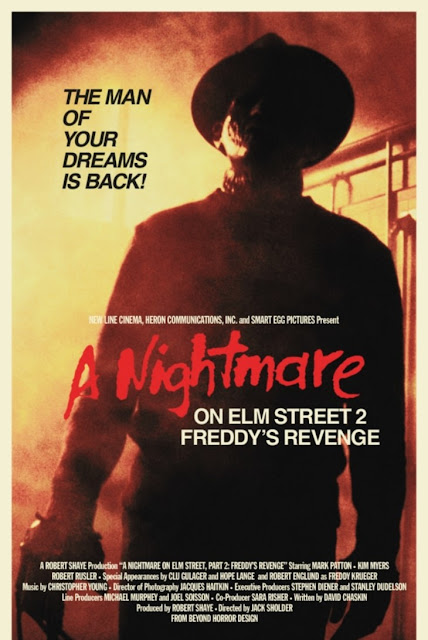 Hi, it’s Burl talking to you once again, and happy to be doing it! I’m here to take a look at another installment in a famous horror movie series, which is to say the Freddy Krueger pictures! This is the second of them, and most people you ask will tell you it’s the worst of the bunch!

Well, I’m not sure about that, but it’s probably the weirdest, and that in itself has value! Ha ha, they also say it’s the most homosexual of them all, and I guess that’s probably correct! Some people seem to think this is a bad thing, but I think there are surely enough gay horror movie lovers out there that it’s only right and proper that this constituency be recognized much better than they have been! Ha ha, probably all the horror franchises should have at least one overtly queer episode just to be fair about things! The Leprechaun one would be a particular gem, I’m sure!
The main character in A Nightmare on Elm Street Part 2 is Jesse, who has the double misfortune of having moved into Nancy’s house from the first picture, and having an unsympathetic dad played by the great Clu Gulager! We’re introduced to Jesse in a schoolbus sequence at the beginning of the movie, which we can immediately tell is a nightmare because in his own subconscious mind, Jesse is apparently a cringing geek!
When Jesse wakes up from this dream, and whenever he wakes up from any dream, and just at random moments throughout the movie, he lets out a piercing, girlish scream that seems dubbed in from one of Fay Wray’s more hysterical scenes! It seems that Freddy is trying to possess Jesse into committing his murders for him; left unexplained is why Freddy (who is referred to in this movie simply as Fred) wants to do the murders at all! In the first picture he had some fairly specific revenge in mind; in this one his mayhem is pretty random, despite the movie’s subtitle!
Everything in this movie is just slightly off, which you might think is because the filmmakers were so clever as to give their entire production an unreal, dreamlike atmosphere, but is actually because the script is simply nonsense! Freddy makes a parakeet explode in flames! Why? He attacks a pool party, revealing himself in an apparently corporeal form to dozens of people! How come? He is apparently able to be defeated by the love of a young Meryl Streep lookalike! Qhé?!?!
I also wonder how Robert Downey Jr.’s pal from Weird Science, once again playing a bullying sportsjock, becomes Jesse’s good friend all of a sudden! I guess it’s because they’re both subjected to the homoerotic attentions of Mr. Kuato, their coach! (And speaking of Mr. Kuato, there’s one shot in this movie where Freddy looks for all the world like that psychic homunculus of sci-fi fame!)
I realize logic is not what you look for in a movie like this, but consistency, along with excitement and scariness, would be nice! But ha ha, we get none of that! However, we do get the aforementioned Meryl Streep lookalike, who was pretty good in her role and reminded me not only of a young Meryl Streep, but of the female lead from The Outing! Ha ha, it would have been nice to get to know both those gals back in the day!
Anyway, some of the weirdness in this picture is enjoyable, like the exploding parakeet and the fact that Clu Gulager thinks it exploded because it was fed cheap birdseed! I give this sophomore stumble in the Freddy Krueger saga one and a half piercing shrieks!
Posted by Burl at 14:16