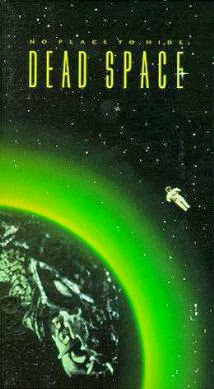 Well, you know what – it’s Burl! This time I’m reviewing a movie called Dead Space, which, if you can believe it, is a remake of another movie I’ve already reviewed, Forbidden World, made only nine years previously! I can just hear the question uppermost in your minds: “Ha ha, Burl, how could they possibly improve on Forbidden World?”
Well, turns out they can’t! You probably remember the plot: a space troubleshooter gets a distress call from a distant space lab, and drops in to offer whatever space help he can! It turns out the scientists have created a life form which is intended to cure some kind of space disease, but it pops out of its incubator, kills a crew member and proceeds to stalk the base, getting larger and larger and munching on people whenever it can!
You can see this is just the same plot as Forbidden World, and of course as Alien too, but that’s beside the point when we’re talking Roger Corman pictures, which we certainly are! What made Forbidden World so memorable was that it very energetically brought what we in the movie appreciation business call The Goods! The goods for a movie like this are approximately as follows: great monsters, plenty of blood and gore, lots of naked ladies, a few witty lines and some exciting action! Good old FW has most of these ingredients, while Dead Space has practically none!
Sure, it has a monster, which starts out looking like a little sponge and ends up like something you might see hanging off the wall in a two-bit carnival funhouse! It’s pretty inert throughout, and lacks even the minimal personality found in the earlier Corman monsters, such as the randy maggot from Galaxy of Terror! This monster just seems kind of sad, even though he was made by Gabe Bartalos, famous for creating the dancing leprechaun in those Leprechaun movies, and everyone loves that guy! Also, I did like it when the monster busted in through walls like the Kool-Ade Man! And there’s a naked lady in this picture too, but it’s a dream sequence where the space troubleshooter, played by the Beastmaster himself, has a dream about making sweet love! And then there’s one pretty good scene near the end where a fellow’s head is pulled right off!
I do have to mention the Beastmaster’s robot companion, Tinpan, who has a hydraulic chin! Tinpan manages to have a bit of a C3-PO-ish prickliness about him, and he’s got that great chin, but below the neck he just looks like a guy in regular human clothes – not the most convincing droid I’ve ever seen! But he's good compared to most of the rest of the cast, with an exception being Bryan Cranston, who plays the head of the lab! No, I don't think it's a meth lab, but you know, now I'm not quite so sure! Ha ha, maybe it was! Anyway, he's okay in the movie! I kind of preferred his correlative in Forbidden World, who was played by the mad scientist from Repo Man! Ha ha, that's the guy who should have his own TV program about mind drugs!
But mostly it’s a dull and boring cruickshank about people wandering up and down space hallways, occasionally shooting their guns at a rubber crab! I have to say that the title is well earned! Tinpan’s okay, but I in the end I give this rather misbegotten picture one single blue Spandex workout suit!
Posted by Burl at 23:15