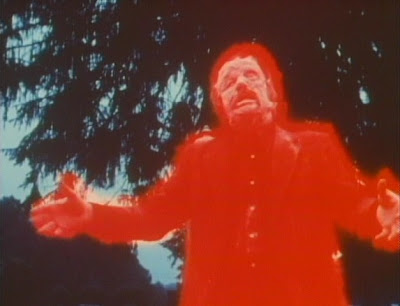 Oh-ho, there you are! It’s Burl! Ha ha, you know, sometimes I’m just perfectly in the mood for one of these backyard regional horror productions, and occasionally when I’m in such a mood, just the right backyard regional horror production is there for me to watch! I saw The Devonsville Terror on just such a lucky day, and it happened again recently with Don Dohler’s Fiend!
Fiend, which very much has the feel of a movie made in a cul-de-sac, was apparently Dohler’s attempt to create a new sort of legendary creature to stand among the classics such as Dracula and Frankenstein Monster! Accoring to Dohler’s home-baked mythology, a Fiend is more or less a cross between the two: an ancient parasitic force, possibly from space, reanimates a hulking corpse to shamble around in and suck the lifeforce from his friends and neighbors through the act of strangulation, or on occasion a pretty stiff neck-twist instead!
The Fiend, in its aerosol form, is flying around the bedroom communities outside Baltimore at the beginning of the picture, and it floats gently over a graveyard and settles into the corpse with the biggest moustache it can find: Mr. Longfellow! Mr. Longfellow rises from his grave, glowing an angry rotoscoped red, and proceeds to strangle a young lady relaxing in the boneyard with her boyfriend! Then he goes off and buys a house! Ha ha, what with I wonder, dirt? The next thing you know, he’s established a small music academy and set up some red lamps in his basement for the purpose of conducting private violin lessons and guzzling Hochtaler! Ha ha, the red lampshades are a pretty nice visual echo of the crimson glow which covers Mr. Longfellow every time he does a strangulation!
Well, next-door neighbor Gary doesn’t like any of this one bit, from the constant violin playing to the uppity undead attitude! He’s got a rival moustache of his own, but it isn’t quite as big as Mr. Longfellow’s if you know what I mean! In fact, whenever Mr. Longfellow is angry or put out, which is frequently, his moustache seems to grow! Eventually it comes down to a titanic moustache-vs.-moustache battle royale, and the cul-de-sac will never be the same!
Ha ha, I first read about Fiend many years ago in an issue of Famous Monsters which also had articles on The Boogey Man, Maniac and several other gruesome productions! Forry’s enthusiastic, pun-filled coverage somehow made Fiend out to be the most dynamic, frightening and gory of the lot, though, and while that turns out to not quite be true (in keeping with Dohler’s old-fashioned aspirations, there’s no gore to speak of in the picture, and it’s only frightening to those with a dreadful fear of facial hair), it does have a certain je ne sais quoi!
It also has some pretty fair acting! Don Leifert, playing Mr. Longfellow, makes a pretty good toffee nose (literally once the oatmeal makeup kicks in!), and the King of Baltimore, George Stover, is on hand to play a cringing lickspittle! Most of all, this movie’s virtues radiate from its can-do attitude and off-season atmosphere! While Mr. Longfellow and the Fiend which animates him may not have entered the monster pantheon, Dohler’s own animating spirit hovers gently over this production like a glowing red space bug! I give Fiend two solid mouth-caterpillars, complete with a droopy lower lip!
Posted by Burl at 07:43