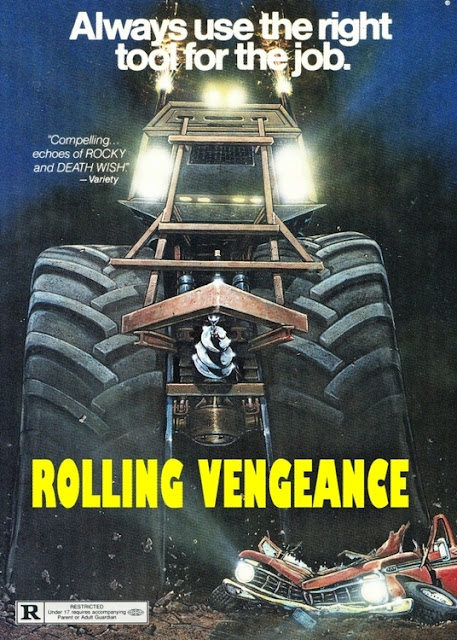 Hi, Burl here with a new review for you! Today I want to tell you about Rolling Vengeance, and before you say “Hey, isn’t that the one with William Devane as a Vietnam vet getting revenge on the guys who stuck his hand down a garbage disposal unit?” I’ll just say that no, it’s not! That one’s called Rolling Thunder, but ha ha, don’t worry because I always make that mistake too! I’ll review Rolling Thunder sometime just to help us both keep them straight!

Rolling Vengeance is about a family of truckers who run afoul of a family of barkeepers! It’s pretty much a feudin’ picture, with no shortage of fussin’ and fightin’ tossed in for good measure!  And just to give you an idea of what you’re in for, the trucker patriarch is played by Lawrence Dane, from the great movie Rituals, and the evil barkeeper patriarch is none other than Ned Beatty, who surely learned all he needed to know about being a slobbering hillbilly redneck from the boys in Deliverance!

The trucker family’s distaff side is wiped out by the hootin’, hollerin’ good ol’ boys Beatty calls his sons, and then they get off scot free! Dane and his son, Don Michael Paul (Ha ha, Don, a couple of other actors called, they want their first names back!) aren’t too pleased about this, and there’s some fisticuffs! Well, soon enough the boys are dropping cinderblocks on Dane’s truck, and he crashes and goes into a coma! Then he dies!

Well, Don’s just about at the end of his rope, so he unveils his, and the movie’s, secret special surprise: Rolling Vengeance, the biggest, craziest monster truck ever made! Don hops into Rolling Vengeance and starts flattening the thugs into pancakes!

There are a lot of them, so this takes a while, but eventually even Ned Beatty must face down Rolling Vengeance, although he gets off relatively easy with a gunshot to the forehead! I was hoping he’d get squeezed out of his leather outfit like toothpaste from a tube under those big truck tires, but no such luck!

It’s a pretty decent vengeance picture as these things go; not too interested in exploring the morality of escalating vengeance maybe (ha ha, remember Harry Brown?), but you have to admit that if you had everything happen to you that happens to Don Michael Paul, and if you had a giant monster truck with a drill bit on the front and fire spitting from the pipes like he does, you’d do the same thing! And Ned Beatty camps it up pretty good, tossing mashed potatoes at his FASD clan at one point!

I give Rolling Vengeance two flattened rednecks and recommend that someday it be widely available on DVD or thought cube or whatever new format they come up with in the future!
Posted by Burl at 10:55