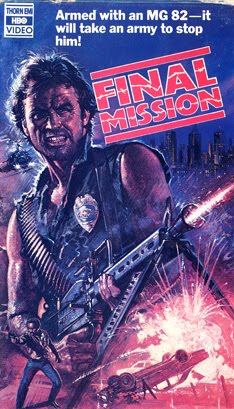 Hi, Burl with more action for you! Along with plenty of slow motion familytime montages and dull domestic scenes! Welcome to Final Mission, a Filipino First Blood take-off that features a few choice action bits near the beginning (and a pretty good head-chopping, ha ha!) and then a great deal of machine gun fire in the final half hour!

It’s impossible to stay away from the First Blood comparisons, I’m afraid! If that 1982 hit had been top-loaded with ‘Nam scenes, urban violence and lots of family drama, and if you exchanged Stallone, Dennehy and Crenna for large cardboard cutouts articulated by brass paper fasteners, you would pretty much have this picture!

I’ll admit, I thought Final Mission might be another Ridiculous Action picture, and while it has moments that certainly qualify, it’s altogether more grim and serious-minded than most low-budget action quickies of the period! It seems that Vince and Slater were buddies in ‘Nam until Slater turned traitor! Vince chops a few heads and puts the stop to Slater’s activities, but fails to seal the deal! A decade later, Vince, played by Richard Young from Friday the 13th part V, is an LA cop with a wife and son, and they get spooked one night when a gang of balaclava-clad marauders called the Main Street Men invade their house while Vince and his wife are making sweet love! Vince gives them some pretty stiff neck-twists to show them who’s boss!

Well, the Irish-accented chief declares Vince a possible loose cannon (and how right he is!) and sends the whole Vince family on a camping trip, where they have great gobs of fun in touching slow motion! But Slater has somehow hooked up with the remnants of the Main Street Men, and together they manage to blow up Vince’s wife and son with a Johnson bomb!

From here on out Vince goes a little crazy, and who can blame him! He punches up guys in a bar and sticks one fellow’s head down a pee-filled toilet! The chief suspends him again and Vince gets an idea that his old pal Slater (played by John Dresden from Raw Force and The Dark) might be behind it all! Vince goes up to the little town where Slater’s brother is the sheriff, gets his hands on a huge machine gun (which is sitting, bullets and all, in a shop window, ha ha!) and goes fully bats! He gets his vengeance on Slater and the Main Street Men pretty quickly, but that doesn’t end the carnage! He just won’t stop firing that gun, and somehow he never runs out of ammunition! He's still firing as the end credits begin to roll, in fact!

There were a few unexpected things about Final Mission! The sheriff is quite sympathetic, at least at first – he’s not particularly corrupt or mean; he's just trying to protect his brother! And Vince goes fully off the deep end, so it’s a little harder to root for him once he’s dispensed with his actual enemies and is just picking off innocent National Guardsmen who’ve been sent in to see what all the bother’s about! The usual blacks and whites of this kind of movie soon blur into varying shades of grey, which I must say was refreshing, even though I’d been expecting (and, I'll admit, hoping for, ha ha!) a good thick slice of Ridiculous Action!

I give Final Mission two Closet Monsters for so unexpectedly balancing ridiculousness and poor acting with genuine pathos and a semi-realistic approach to what it might really be like to be an action hero when you neither asked nor expected to be one! It could simply drive you nuts, and that’s sure what happens to Vince! Ha ha!
Posted by Burl at 15:06