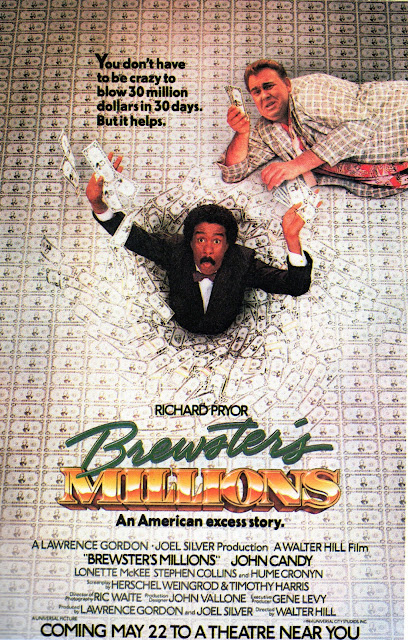 Hi, it’s Burl here to review a movie that had a lot of potential! Well, maybe not a lot, but a lot more than was ever realized by the final product! Brewster’s Millions was about the ninety-hundredth adaptation of a 1902 novel of the same name, and I guess it’s the wish-fulfillment storyline that keeps it so perennial! It seems there’s a down-and-out type of guy who turns out to have that eccentric rich uncle we all would like to have; and this uncle croaks it and leaves all his money to the schmoe! But of course there’s a catch: to make him appreciate the money, he must spend a huge chunk of it in thirty days without anything to show for it at the end, just to give him a disinclination for free and easy spending!

So it’s a classic chestnut of a story! Let’s just say it’s the mid-80s, and one of the great comedy talents of the era, Richard Pryor, is chosen to play Brewster the squanderpuss! And let’s say he’s surrounded by a dependable group of comedic players, including the majestic John Candy, and the project is written by some guys who’ve had a recent success with Trading Places, a very similar story, and the whole thing is entrusted to a real left-field choice of director, namely the great punch-‘em-up king Walter Hill! Sounds pretty good, right?

Well, what they came up with after all those fine ingredients was this frou-frou, and I’m sorry to speak in such harsh terms, but it’s not worth a cruickshank! Pryor’s not too bad as the baseball-obsessed simpleton Brewster, but John Candy is both mis- and underused as his rotund best pal Spike! Candy was an excellent comic actor, and played just about every kind of character on SCTV, but in the movies it was always a bit dicey whenever he tried to play a slightly sleazy guy! His character in JFK is a good example!

Brewster’s Millions starts out not too badly, that’s the sad thing! Pryor and Candy are on the Hackensack Bulls, a minor league team so minor that they have freight trains chugging through their outfield! The Bulls manage to win a game though, and we go to a scene in a bar which ends in a wild donnybrook! Ha ha, we get to see John Candy and Richard Pryor kicking bu*t and then ending up in jail together, and at that point it looks like we could be in for a profane action comedy along the lines of Hill’s earlier 48 Hrs.!

However, no such luck! After Brewster learns about his inheritance and the secret clause, and sets about spending his $30 million in thirty days, the movie settles into a repetitive groove! Brewster does something dumb and excessive with money while his associates look puzzled, or he gets downcast when he accidentally makes money, or there’s a montage of him spending money crazily! Eventually the movie doesn’t so much end as peter out in a non-climax that features Brewster throwing one measly punch at the ridiculously ineffectual forces that have arrayed against him over his mensis perditus!

I know free advice is worth exactly what it costs, but here comes some anyway! This movie should have starred Eddie Murphy and should have been rated R with plenty of profanity, maybe some nud*ty and a bunch of generally bad behavior! Richard Pryor, as great as he was, was too old for the role, and had been in too many bad movies! Of course, this came out the year after Beverly Hills Cop, and Eddie would have been pretty hard to get, especially for a project that’s a close carbon copy of a movie he’d already done, Trading Places!

In a movie about squandering, it’s the squandering of John Candy that somehow hurts the most, and there’s an appearance by fellow SCTV veteran Rick Moranis that’s just as bad! He just plays a guy in a blue tuxedo who repeats everything other people say for some reason! And they even waste Yakov Smirnoff, who appears, says “What a country!” and then more or less vanishes! There’s also a Ry Cooder score that’s as impersonal as the one from Blue City, and Hill’s direction is just plain lackadaisical! I give this disappointing picture one single motorized iceberg!
Posted by Burl at 14:23