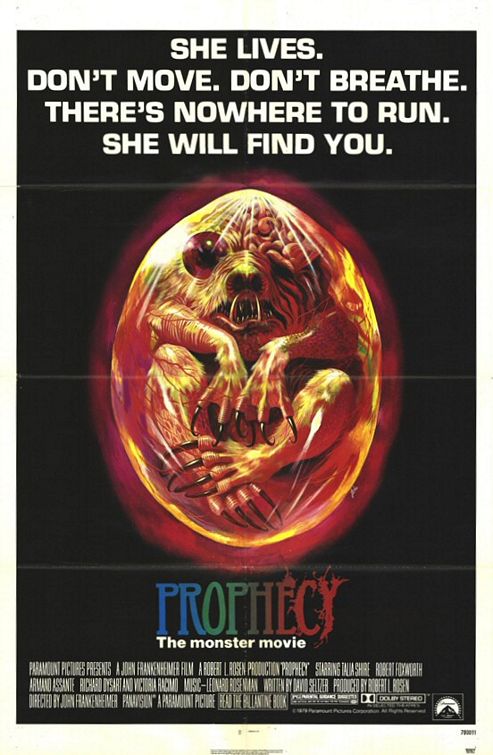 Hi, Burl here with a review of what might have been the first movie I ever saw on the VHS format, over at my pal Dave’s house after his family got themselves a top-loading VCR as big as an old humidifier! I went with Dave and his dad one Friday night down to Krazy Krazy’s, the component shop where they had bought the highly modern device, and we were allowed to pick a movie to watch, any movie! One title stood out, and that was Prophecy, which I remembered as having played at my neighborhood movie theatre when I was even younger, and boy oh boy the movie poster alone had me spooked out my young mind!

So you can bet we were pretty excited about watching the movie! It starts with some guys running through the woods, leading some baying dogs and obviously on the hunt for something, and quicker than you can say “Sweet Nancy, I been cornswoggled!” they go over a cliff and get eaten by some kind of monster! This is all supposed to take place in deepest Maine, but I learned later that the movie was made in British Columbia!

So naturally a public health official and his cello-playing wife are sent up to see what’s going on! Ha ha, turns out there’s a territorial dispute between a paper company and the local native peoples, who are represented by none other than Armand Assante in redface! Very quickly, the scene where Armand Assante uses an axe to fight a paper mill guy who’s got a chainsaw made its way into schoolyard lore; but of course we were also very excited about the scene with the family of campers who get attacked by the monster, and there’s a kid who can’t get out of his sleeping bag in time, and as he’s hopping around helplessly the monster bats him across the campsite and he explodes in feathers against a tree! Ha ha!

So just what is this crazy monster? Well, it’s sort of like if a giant bear was crossed with a huge pig and then they were turned inside out and wrapped in bacon! No wonder it’s upset, anyone would be! The public health official, Rob Vern, and his wife Maggie, try to figure out what’s going on and they eventually learn that the paper mill is letting mercury into the water system and creating giant tadpoles, huge trouts, angry raccoons, and of course the monster! And then there are monster babies to deal with as well!

A few interesting facts: Maggie is played by none other than the mother of Max Fischer from Rushmore! Rob Vern is of course Robert Foxworth from Death Moon, thank goodness wearing a beard! And the monster was played by Kevin Peter Hall, a very tall man who was also the Predator from the movie of the same name; Harry from Harry and the Hendersons; the alien from Without Warning; and one of the Misfits of Science! What a career – it’s too bad he died young! The jocular head of the paper mill is played by Richard "The Thing" Dysart! And, in an amazing fact I can barely credit, Prophecy was directed by John Frankenheimer, who made such classics as The Train!

You know, most people don’t like this movie very much! But, ha ha, old Burl often finds himself a lone voice in the wilderness, and here again I have to say that, although I might be the only such person in the world, I really like Prophecy! I can’t claim it’s a good movie exactly, but it’s a perfect flick to take along to the cottage or some similar place and get yourself all spooked up that something might be out there in the woods, just outside your range of vision, breathing heavily and about to lumber out and bite your head off! I give Prophecy three Richard Dysarts and heartily recommend that you give it a look sometime soon!
Posted by Burl at 12:21