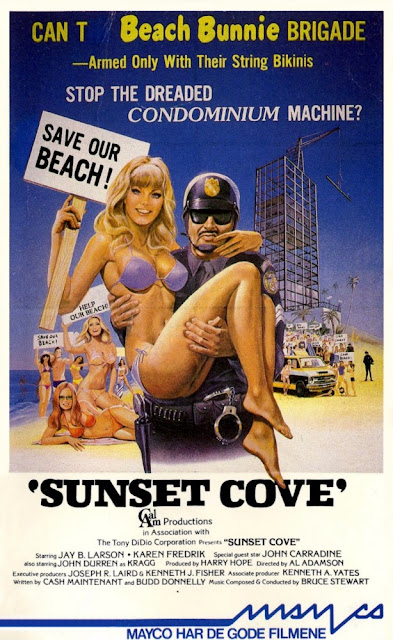 Hi, it’s Burl here with my first movie review! I’m going to try to tell you about movies you’ve probably never seen – maybe even never heard of before! Ha ha, and I’m pretty sure Sunset Cove fits into that category!

Sunset Cove was made in 1978 or so by Al Adamson, a guy who made a bunch of schlocky horror movies and then got killed by his live-in contractor, who then employed his contractor skills by burying poor Al in concrete and finishing a tiled bathroom floor over him so that he would never be found! But they did find Al, and the contractor was arrested and put into jail, and glad I am of that!

Sorry to start this review with these horrific facts! Sunset Cove itself is not horrific at all – ha ha, it’s quite a cheery little picture, actually! It seems school is about to end for the year, and a bunch of kids who look way too old to be in school anyway drive “The Complete Van” out to Sunset Cove so they can run back and forth across the sand and also do a little hang gliding off the bluff! And sometimes the ladies take off their shirts to run around for a bit! Ha ha!

But all is not as idyllic as it seems in Sunset Cove! There’s a nasty police officer, Kragg, who hates the kids and calls them “birth defects!” There’s also a muscle guy who acts like a bit of a jerk – he’s just like Dugan from Malibu Beach and The Van, but it’s not Dugan! This one is called Moose, and he turns out to be an all right guy! Worse than the cop or the muscle guy is Dexter, a developer who conspires with the goofy mayor to build forty-story high rise condos right there in Sunset Cove!

But just as the Bible tells us the fable of the foolish man who built his castle upon the sand, so we know that it’s a bad idea to tangle with the kids of Sunset Cove! They take a little time to ride around in “The Complete Van,” which is a sweet boogie van with those words airbrushed across the side, and there’s plenty of making sweet love, even for Chubby, the enormous fat guy who only ever talks about food! It’s also important to note that the blond guy who owns “The Complete Van” is about the biggest jerk in the movie, except I think he’s supposed to be the hero!

The real hero is a glasses nerd, sort of a Dilton figure, who teams up with John "Satan's Cheerleaders" Carradine – one of my favorites! – to figure out the legalities of saving Sunset Cove! Of course there’s a big dance party on the beach, and then there’s a court case where Carradine delivers a great speech, and then an old statute is unearthed which proves Sunset Cove must remain public property! Ha ha, it all works out great!

If you like to watch people frolicking on the beach, ladies with no shirts, portly fellows eating, boogie vans, or John Carradine, you must check out Sunset Cove! It’s pretty rare – in fact, a fellow who wrote a book about Carradine believed it to be lost – but you can see it for free on the Internet! Just check around and you’ll find this excellent, fun-loving motion picture for the ages! I give Sunset Cove one and a half Save Our Beach T-shirts!
Posted by Burl at 11:13