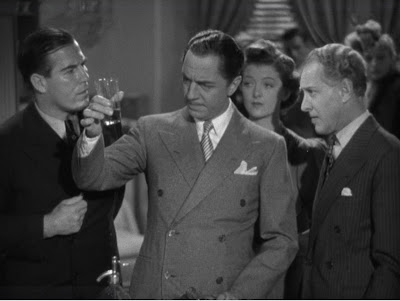 Hi, Burl here! Today I thought I’d check out the third film in that Thin Man series – you know, the one about the socialite detectives, Nick and Nora Charles! (Not to be confused with Moses Wine, the socialist detective from The Big Fix!) And of course we can’t forget Asta the dog, who even does one of her patented flips at one point in the movie! Ha ha!

The gimmick in this one is that Nick and Nora have a child, a little baby named Nicky! He doesn’t do much though – his detecting powers are still pretty undeveloped! In fact he doesn’t figure much in the plot at all, until the very end anyway, and even that’s for only about thirty seconds!

The plot was a little confusing for ol’ Burl, I do have to admit, and it didn’t help that I was a bit groggy during the final scene where Nick explains the whole complicated plot! But it goes like this: Nick and Nora are invited to the Long Island mansion of an unpleasant old colonel who’s been getting death threats! Ha ha, the colonel does indeed get offed, and from there it’s a long road to sorting through all the various gangsters, gangsters’ assistants, secretaries, housekeepers, gamblers, molls and even relatives to find out who did the old boy in!

It might sound like a Christie-esque drawing room mystery the way I’ve described it, but the second half of the movie takes place back in the city, including an amazing scene of slow-motion proto-breakdancing in a Latin club! You’ve got to see it! There’s also a birthday party full of small cradle-babies and pug-faced crooks straight out of Runyon!

I have to say, for a lighthearted murder-mystery of the thirties, the movie is curiously brutal! Early on a big friendly dog has his throat cut, and we see a lingering shot of his bloody corpse! And the colonel too gets his throat slashed, and also his wrist broken and his head bashed! It’s like Jason Voorhees got loose in Dashiell Hammett’s world somehow! But of course Nick and Nora take it all in stride, usually with a wry comment and a slug of gin!

There’s a little less emphasis on the boozing in this one, as compared to some of the other Thin Man movies, but it’s still the basis for a few good gags! During a melée in their apartment, Nora frantically tells Nick to “Do something!,” and his response is to say “Certainly” and take a big sip of his whiskey! Ha ha!

Altogether this is a fairly engaging, quite entertaining, somewhat confusing little bauble of a movie, and I give it two and a half Bacardis – pronounced BACK-ardee, mind you!
Posted by Burl at 21:48