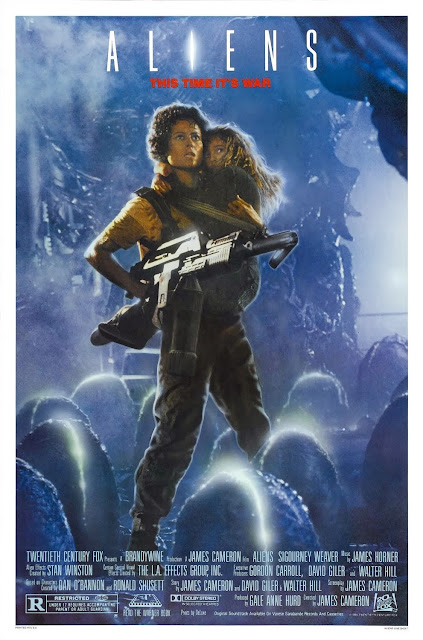 Hi, it’s Burl – look into my eye! Ha ha, yes, that’s right, I’m here to review the second movie of all the Alien movies for you, James Cameron’s monster-action picture Aliens! I remember being pretty excited when this one came out in the summer of 1986, and boy was I not disappointed! That was a pretty good summer all around, Hollywood movie-wise, because as I recall there was also The Fly, Stand By Me, Maximum Overdrive, Friday the 13th part 6, Night of the Creeps and Manhunter! (Of course, that year also brought us Blue City, Poltergeist II and The Money Pit, so it wasn’t all sweet honey gold!)
Aliens was easily one of the most entertaining movies that year for me! Ripley was a terrific character, perfectly suited to Sigourney “Cabin in the Woods” Weaver! (Ha ha, any relation to Doodles Weaver, I wonder?) But it still makes no sense to me that she would go back to the planet for any reason whatsoever, or that the company would want her to go! Maybe their intention was simply that she be killed on the trip so she couldn’t spread alien stories on Earth, but if so, ha ha, that seems a ridiculously elaborate assassination setup!
There’s a pretty steady build-up – even steadier in the director’s cut version I watched this time around – and then the second half erupts into what seems a series of never ending climaxes! There are aliens everywhere, with the same fondness for ductwork displayed by their late brother in the first film! (But since the little girl, Newt, has survived by hiding in the ductwork, one assumes that at this particular space colony there is simply enough ductwork to go around!) It’s hard to begrudge Bill “Weird Science” Paxton his panic and very vocal dismay with the situation, because Cameron lays on the worse-and-worse with skill!
Great cast for the most part, too! I always appreciated Newt, but never really liked her – something about her voice, I think! Not the actress’s fault though, because she did a fine job! Michael Biehn is okay, but kind of a non-presence – I never thought he was a good actor until The Abyss, in which he sports a moustache and orbits around Planet Ham without ever quite alighting on it! Robotic Lance Henrikson has an appealingly gentle mien, and the space marines in general show off plenty of pep!
The trick effects, particularly the monster effects, are marvelous! And you just can’t beat that big exosuit forklift thing! The planet looks a bit tabletop now and again, and I could have handled a little more Ridley Scott atmosphere, because this picture so stylistically different from its forbear as to be nearly decoupled from it! Maybe that was Cameron’s intent, and I suppose that, as a career stratagem, it worked out for him pretty well!
It’s a terrific popcorn picture, and it works hard to give everyone their money’s worth! It also made for a great double feature with The Fly later that summer, which I went to see even though I’d seen both movies already! For fond recollections and good times, and a score that sounds like Wolfen (but I say ha ha, why not!), I give Aliens three cameo appearances by Jones!
Posted by Burl at 01:12

Email ThisBlogThis!Share to TwitterShare to FacebookShare to Pinterest
Labels: 1980s, action, aliens, saw it on the big screen, sci-fi, sequel