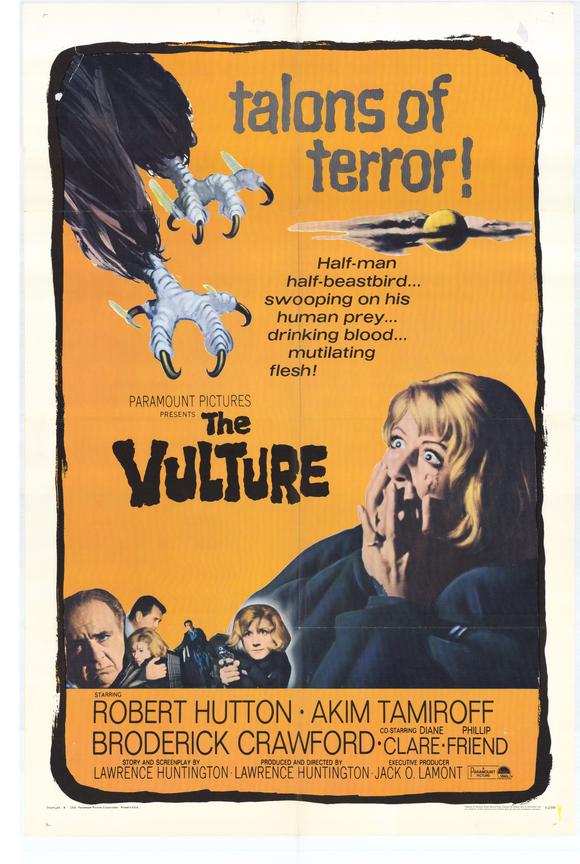 Hi, Burl swooping down at you with a cry of “Screeee!” and a new movie review! The Vulture is a strange little movie that must have seemed old-fashioned even on its original release! It came out in 1967, as the hippies danced and man made plans to conquer the moon, but, with its creaky dialogue, rustic locales, stodgy characters and static camera, it might as well have been made in the mid-1940s!

I’ll give it credit for trying to invent a new sort of monster, though! It seems that in Cornwall, England, a monstrous birdman is wheeling and swooping about, singing “ca-caw!” and frightening innocent if cynical schoolmarms! It’s a good thing a nuclear scientist is vacationing in the area, for who else would be able to so completely abandon reason and rational thought as to make the bizarre leaps of logic necessary to crack the mystery?

Broderick Crawford, from All the King’s Men, is a newspaper baron who wears the type of quilted smoking jacket we often see in movies of this sort, but it fits neither his physique nor his barky, brusque personality! It’s as though they’d hired Peter Cushing, but at the last moment he had to rush off and star in The Blood Beast Terror or something instead, so they called in Crawford and just gave him Cushing’s costume and dialogue without tailoring either one!

And of course there’s Akim Tamaroff, who we all love so well from Touch of Evil, and he plays Professor Koniglich, an historian and practitioner of weird science who may or may not have a close connection to the feathered menace! I won’t go into the details of the birdman’s raison d’etre, but it involves a Spanish pirate, his pet bird, a lost treasure, a premature interment, a family curse, a nuclear transmutation, a creepy sexton and a bulky topcoat! Ha ha, they must have thrown the kitchen sink in there somewhere!

But while everything else under the sun is packed into this picture, what we don’t get is some great shots of the manbird! We see his talons, and we sort of see his feathery shoulders and wings, but where are the shots of him flying around shouting imprecations! That would have made the movie for this reviewer! We don’t even get a really good shot of him just standing there!

Well, I’d call that a missed bet, one which I can only put down to a failure of imagination! The movie could have been so much more, but with all the drawing-room chatter and crazy science talk, it comes off more as a nutty stage play of the Edwardian era! You know, there’s nothing too wrong with that, now that I think of it, so for pure bunkum and honeydew I give this movie one and a half jumped conclusions!
Posted by Burl at 10:46