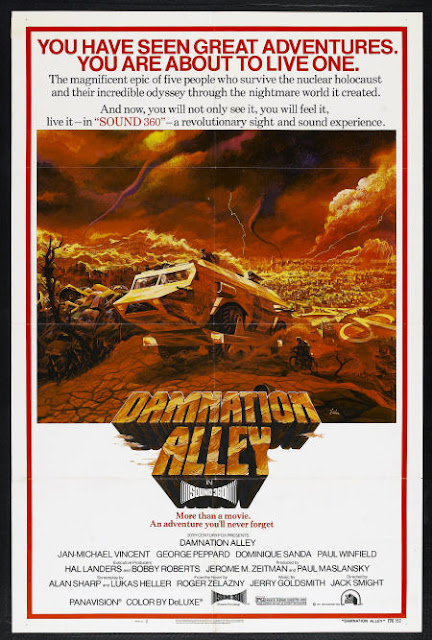 It’s Burl again! Recently, as a part of my summer reading program, I took on the 1969 short-story-turned-novel of Roger Zelazny called Damnation Alley! I’m not all that big of a science-fiction or fantasy buff, though I have nothing against it, and so really the only other Zelazny books I’ve ever read are those Chronicles of Amber ones, and then only at the rabid recommendation of a friend! But ha ha, they were pretty good!

Damnation Alley was pretty good too! It told the tale of a violent biker in a post-apocalyptic world where the only parts of America still populated are California and Boston, which are two pretty good choices if you ask me! (They never mention what’s happened to the rest of the world!) In between those two places can be found only rock storms, whirlwinds and monsters! There are giant snakes, huge gila monsters, herds of bison for some reason, lots of oversized bats, spiders, aardvarks and yes, even giant butterflies! Boston is in terrible need of a plague antidote, and H-E-double-hockeysticks Tanner, the biker, is chosen to drive a big armor-plated car across the desolate territory known as Damnation Alley to try and save everybody in Beantown! With its constant traveling scenes and vivid descriptions of ever-changing landscapes, the book reminded me a bit of a sci-fi version of Blood Meridian!

In 1977 they made a movie of this tale, and let me tell you, they changed almost everything! I saw it on TV when I was young and knew it was at least somewhat different, but after reading the book I thought I’d take another look to find out just how much! Turns out a lot, ha ha!

Now we’ve got George Peppard as some kind of cracker Army guy, Jan-Michael Vincent (of the deeply tragic career arc, and also Enemy Territory) as a blonde surfer dude, and a few others along for the ride! No giant butterflies here, but they kept the whirlwinds and added giant scorpions, deformed mountain men (who look like they stepped right out of the same year’s The Hills Have Eyes) and of course Killa Cockroaches! I repeat, Killa Cockroaches!

As far as the extra characters go, there’s Paul Winfield, who wears upside-down American flag patches on his jacket and suffers a horrible, too-early demise at the claws of the roaches; Jackie Earle Haley from The Bad News Bears as a perpetually grimy, rock-tossing kid; and lovely Dominique Sanda as a Vegas showgirl who is found in Circus Circus and spends the rest of the movie serving the men food and making them coffee! Ha ha, the first thing they do when the kid gets on board is teach him to drive the big car, an invitation they never extend to the showgirl! Contrast that with the lady from Dawn of the Dead, who very sensibly demands to learn how to fly the helicopter so that she can get away if anything happens to their pilot! Ha ha, but that’s only one way this movie is old-fashioned!

Another way is the special effects, which look like they were done by Bert I. Gordon on a bad day! The giant scorpions are particularly lame! There’s a too-heavy reliance on stock footage, not a good thing in a supposed tentpole-type release! And the movie as a whole has a kind of cheap, TV-movie look, in spite of its expansive wide-screen photography and plentiful explosions!

But I’ll tell you what’s good about the movie: the awesome battletruck! That’s the real star of the show, with its rockets, grenades, tri-wheels and accordion joint! Of course, having a vehicle as the star means lots and lots and lots of driving scenes, and this movie delivers them in spades! Also they seem to be perpetually hunting for gas and never finding any, but that somehow is not a problem! To me, other than the truck, the biggest star is Jackie Earle Haley, whose appearance I was dreading, but who turned out to be great! His rock-throwing saves the day at least once, and he reminded me of that other filthy post-apocalyptic moppet, the Feral Kid!

All in all, I give Damnation Alley one and a half fake nuclear skies! They could have made a great movie from that book, and it really baffles me why they changed it so much! It’s a pretty good Seventies relic, since that sort of big truck was exactly what they were interested in then, and there’s a good Jerry Goldsmith score, but all in all it’s a pretty weak attempt at big-budget science fiction, and no wonder people paid a lot more attention to Star Wars that year, ha ha!
Posted by Burl at 12:00