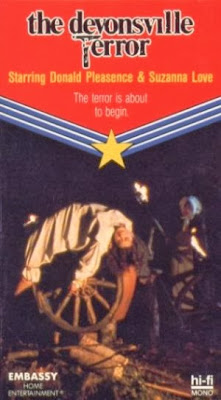 The man’s most famous movie is probably The Boogey Man, which I just might review here for you sometime soon! That one was a minor horror hit back in 1980 or so, and popular enough that he was able to follow it up with a couple of other horror pictures featuring some famous actors! There was Brainwaves, which was some kind of mad scientist movie starring Tony Curtis, Vera Miles and Keir Dullea, and then there was this one, The Devonsville Terror, a witch picture featuring the always-welcome presence of Donald Pleasance, the star of the Halloween pictures and of course Blofeld from the middling Bond adventure You Only Live Twice!

Like any good witch movie, this one starts in the past, with some innocent women being tormented and executed as sorceresses! Well, the foolish townspeople have thereby opened a parcel-package of cursed whoop-ass on themselves, since their witch problem has now become self-fulfilling! (Some reviews of this movie claim the curse proves the townspeople were right all along that the ladies were witches, but I say they were innocent until wrongly convicted, like any other vengeful spirit you might see in a movie!)

Three hundred years later, the people of Devonsville, or at least the men of the town, are no less foolish! When a trio of new ladies – a schoolteacher, an environmentalist and a radio host – move to town, the good burghers of Devonsville are immediately suspicious of their modern, secular ways and extremely mild feminist tendencies! Ha ha, these guys would probably be members of that crazy “tea party” they have in the United States these days, if it existed in Devonsville in 1983!

Prominent among the townspeople is a shopkeeper, who looks a little like an even pudgier Phillip Seymour Hoffman and who favors vests as his fashion statement of choice! He smothers his wife with a pillow and then sees a pizza face flying at him in the bathroom! This incident, while alarming, doesn’t interrupt his weekly dinners with the local priest, the local hothead, a local little girl and a local stone-faced Claude Akins lookalike!

Meanwhile, Dr. Worley, the local sawbones, is busy sitting in his office pulling worms out of his arm, or else getting people to strip to the waist so he can hypnotize them! Donald Pleasance is Dr. Worley, and they must have filmed all his scenes in one day, because I don’t think he ever leaves his doctor’s office! But he’s great in the role anyway, as Pleasance always was! And he’s a good guy too, not one of the reactionary townsfolk!

There’s almost nothing actually good about The Devonsville Terror though, at least in conventional movie terms! Except for Pleasance and the shopkeeper guy, the acting is terrible! The story is told in a very abstract way, which I have to put down to incompetence rather than avant-garde narrative technique! The pacing is leaden and the movie seems at times to be all talk!

But guess what: I really enjoyed it! There aren’t a lot of movies that can muster a truly effective autumn atmosphere – even Halloween doesn’t get it quite right, since it was shot in an L.A. neighborhood in the summer, using bags of leaves and painted gourds to make it seem like fall! But this one has an excellent overcast look, with skeletal branches etched against a grey cloudy sky and dead leaves skittering down lonely gravel roads! There’s something almost cozy about this weird, boring little movie, and watching it is sort of like putting on a comfy sweater! Also there’s a pretty good ending, with laser eyes and melting heads, which will remind you of the climax of Raiders of the Lost Ark as recreated on a $1.95 budget!

The movie was shot in Rebane Country, which is to say Wisconsin, and indeed Bill Rebane was some kind of associate producer on it! I’ll have to review a few Bill Rebane movies for you here, in case you’re unfamiliar with this unique regional auteur! But for now we’re talking Lommel, and for its cozy fall atmosphere and its determination to stay on the side of the modern, progressive ladies rather than the cruel, conservative townsfolk, I give this movie two burning wagon wheels!
Posted by Burl at 16:12