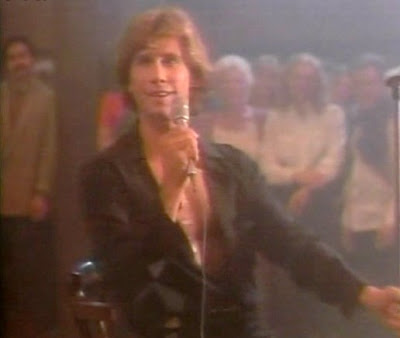 Hi, Burl here! I don’t know what it is about made-for-TV horror movies, but they sure are weird sometimes! The Horror at 37,000 Feet was strange enough, but get a load of This House Possessed! Ha ha, I saw this one when I was a wee sprout, and I remember being very impressed by it to be sure, but boy is it an odd one!
Parker Stevenson stars as a feather-haired softrocker who collapses in the middle of one of his most popular and stool-softening numbers! Why does he collapse? Well, somehow a haunted house miles away has contrived a plan to reunite itself with its beloved little-girl mistress from years ago; and somehow the house has decided that the now-grown girl will fall in love with Parker Stevenson if given a chance; and somehow it has caused Parker Stevenson to pitch his fainting fit by remote control; and somehow it ensures that Parker Stevenson recuperates in the very hospital, on the very ward, where the now-grown girl works as a nurse! Phew, ha ha!
If you can swallow that series of horse pills, here’s another whopper for you! It seems the evil abode can watch anyone it wants on television at any time no matter where they are! Ha ha, for all you know that house might be watching you on TV the next time you’re astride the toilet! Think about that one for a moment!
Well, the house’s plan works perfectly, and the next thing you know Parker Stevenson has hired the nurse as his private caregiver and they’ve moved into the ultra-modern haunted house! It has an extensive security camera system, which seems quite redundant in light of the special TV powers already mentioned, and it also has a high security fence and shatterproof windows! Ha ha, I wonder if all that will cause trouble for our softrocker later on!
Eventually the house starts acting up! Whenever someone gets close to its secrets, such as a nosy librarian or Parker’s manager, Slim Pickens, the demonic dwelling simply engineers a gruesome demise! Ha ha, things get pretty bloody for TV, I can tell you! Slim Pickens, who I could barely believe was in this movie at all, let along playing the cowboy-hatted manager of a limpsy-stricken softrocker, gets impaled by flying glass! The librarian is crushed and burned by the front gates! A goggle-eyed bag lady is parboiled in the swimming pool! Yikes, that’s got to smart!
Even if you just annoy the house slightly you’re in for an unpleasant surprise! A teenage couple attempt to make sweet love on the grounds and are chased away by a spraying garden hose! A nasty lady tries to steal Parker away and gets a shower full of blood for her trouble! (I’d have thought the house would want to encourage this relationship so that it could have the nurse all to itself, but what do I know about the motivations of a house?) And a police officer investigating the mystery is himself annoyed when he tries to pin down the genre of music Parker Stevenson trades in! “Ha ha, not exactly rock,” Parker says, and I’m inclined to agree with him!
I do have to admit that the movie was not quite the masterpiece of terror and bizarre shock that I remembered from my youth! And boy oh boy, are those soft rock songs horrible! Ha ha, “Sensitive Burl's Not!” I guess! Nevertheless, it’s a weird and eventful enough motion picture that I enjoyed it thoroughly! I also thought Lisa Eilbacher, in the role of the nurse, did a pretty good job! I give it two pulsating fireplaces!

Also: you can read more about this curious motion picture here!
Posted by Burl at 22:39