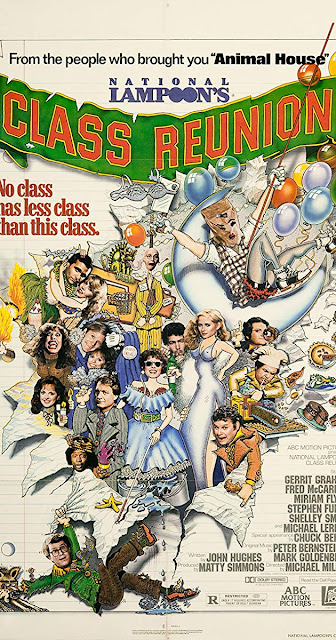 Ha ha, it’s Burl here to review a comedy! Or at least a movie that supposes it’s a comedy! I’m talking about the slasher movie parody National Lampoon’s Class Reunion! I guess that’s the official title, but if I was Mr. National Lampoon, I’d maybe keep my name off the poster of this particular effort! Ha ha, stick with possessiveifying Animal House and Vacation, Mr. Lampoon, that’s my advice!
Let me tell you right up front: this movie stanks! It stanks so hard! There were a number of slasher movie parodies made around the same time as this, pictures like Student Bodies, Wacko and Pandemonium! Now I haven’t seen all those movies, but I feel pretty sure that they must certainly be better than Class Reunion! They could hardly be worse!
The movie starts out a lot like that old favourite Terror Train! At a graduation party, a hapless class dweeb is tricked into an unpleasant assignation with a supposed sure thing! But instead of a dismembered corpse as in the railroad picture, the bagheaded certainty with whom the dweeb is coupled turns out to be… well, that’s the twist! Wouldn’t want to give it away, ha ha!
Well, okay, I will: the dweeb turns out to be making sweet love to his own twin sister! By garr! No wonder that ten years later at the class reunion he shows up with a bag on his head and a mission to kill! And here is a group worth killing: you’ve got Gerrit Graham as the BMOC who masterminded the cruel prank; Stephen Furst, the flounder from Animal House, playing the gross-out king Hubert and applying whatever he learned from John Belushi to his part; Art Evans from Fright Night as a mind-stoner, which is funny because he usually seems to play a cop; and many more! The great Michael Lerner shows up as a mystery doctor, and he provides a special surprise later on!
Now, these are not untalented people! And the script for this movie was written by John Hughes, and whatever you think of his teen angst pictures, he’s usually good for a few bon mots! On top of this, behind the megaphone was the portly director Michael Miller, who, the very same year he made this bumkin of a movie, made the enjoyable Chuck Norris-vs.-Frankenpsycho picture Silent Rage! (Ha ha, I’ll try to review that one pretty soon!) So why did Class Reunion end up as such a feeble cruickshank of a movie?
Things just fall that way sometimes, I guess! There are some okay bits – Anne Ramsey, well known from Deadly Friend, plays the lunch lady, and she has a fairly hilarious kung-fu battle with the killer! And Chuck Berry provides some fine musical entertainment, but he’s apparently finished and gone before the killer begins his violence work! But the rest of it is almost aggressively unfunny, and not in a Neil Hamburger way! The filmmakers probably didn’t think that, for example, a blind crippled lady crashing into things was inherently funny, but they sure fooled themselves into thinking other people would find it funny! I liked the idea that one of the students was a vampire for some reason, but he never did anything particularly vampiric, and he had the worst attempt at a Bela Lugosi accent ever! Ha ha, I thought anyone could do Bela! Even Martin Landau from Without Warning did a pretty good Bela!
Well, this movie is the worst kind of daffodil, and I can in good conscience give it no more than one half of a girls’ convenience!
Posted by Burl at 22:29