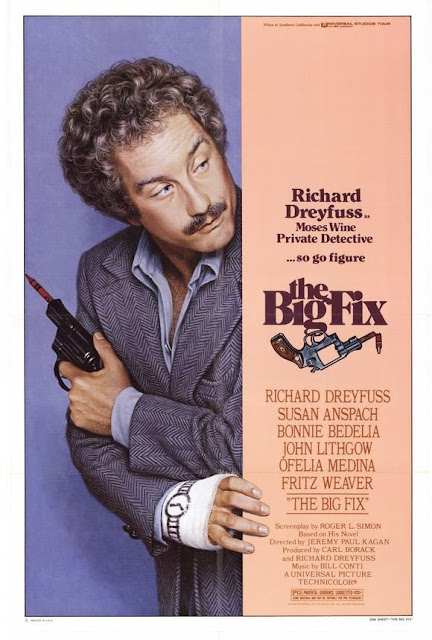 With a mellow grin it’s Burl, here to review a movie about a shaggy, uncommitted anti-detective plying his trade in 1970s Los Angeles! Ha ha, no, I’m not talking about The Long Goodbye, but about The Big Fix, which you might say is a sort of Long Goodbye-lite!
The movie stars Richard Dreyfuss from Jaws (and he also produced the picture!) as a the detective, a weepy, cynical, bong-smoking ex-activist named Moses Wine! He’s got a cast on his hand, an ex-wife, two kids he sees part-time (but often has to drag around with him on investigations), a delightfully bolshy aunt, and a gun with a crayon in it! He gets caught up in a case involving the attempted smear of a gubernatorial candidate and an Abbie Hoffman-type revolutionary! There’s also a rich man, his missing son, a lot of talk about the good old days at Berkeley, and, eventually, a murder!
I won’t go into the plot too much, because what the movie’s really about is the Sixties, and what became of those heavily invested in its hippie spirit a decade after the fact! It would have been an interesting movie to see on its original release – it would have been relevant, maybe even compellingly so, instead of a rather quaint period piece! I guess you might call it a victim of The Big Chill effect!
But the longing for 60s idealism is also the picture’s strongest feature, as well as its thematic and emotional spine! It’s about the most post-Watergate picture there is, with the possible exception of All The President’s Men, ha ha, and the distance between 1968 and 1978 never seems so great as when the greying (but still young) Dreyfuss watches a compilation video of the earlier decade’s greatest protest hits, and weeps for its loss! Ol’ Burl has great sympathy, politically and otherwise, for those progressives of long ago, and it was a treat to find a genre picture that explored their world!
As a detective thriller it suffers a bit from an overly complicated plot and a terribly inappropriate musical score from Bill Conti, who was every bit as prone to that as the notorious Dave Grusin! But there’s a great supporting cast – F. Murray Abraham from The Grand Budapest Hotel plays the missing activist, John Lithgow from Rise of the Planet of the Apes and Cliffhanger is a campaign manager with a secret, and Bonnie “Die Hard 2” Bedelia plays Wine’s annoying ex-wife! The elderly aunt, who apparently is extremely elderly as she claims to have dated both Bakunin and Kropotkin, is a grand creation, the kind I’m always happy to see on screen! (Ha ha, I guess maybe it’s time to watch Reds again – I haven’t seen that picture since I was a small fry!)
And one unexpected pleasure of The Big Fix is that it’s a Halloween movie! Ha ha, it just happens to take place around that particular time, so you get some nice scenes with trick or treating kids and so forth! I like movies that take place during a holiday season, but the season is completely incidental to the story!
I enjoyed The Big Fix perhaps more than it really deserves to be enjoyed! It’s no crundlebum, but to my mind it could have been a whole lot better – a 70s detective classic like The Long Goodbye or Night Moves! Instead it sits down on the Solid Efforts level with The Late Show and other such pictures! Oh well – I’m still glad it exists, and was happy to have watched it! I give The Big Fix two and a half VW bug car chases!
Posted by Burl at 20:38