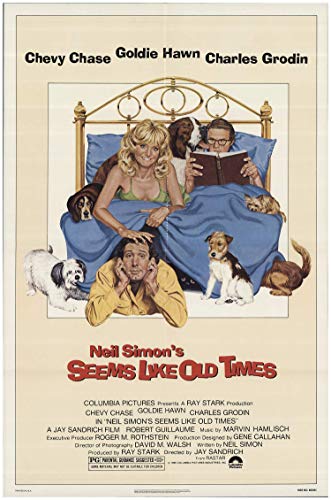 Ha ha and screwballs, it’s Burl, reviewing another motion picture for you! This one comes from that strange period I’ve spoken about before, roughly 1979 to about 1981, that fascinates me because, at the time, I saw the adult-oriented movies that came out in that time as incisive peek-a-boos into a grown-up world I didn’t understand but desperately wanted to! Perhaps, ha ha, movies like this one, Same Time Next Year, The Last Married Couple in America, or The Four Seasons, would provide the clues necessary for me to navigate this alien landscape!
Then again, perhaps not! Ha ha, Seems Like Old Times doesn’t have a particularly strong relationship with adult reality, as it turns out! That in itself isn’t a strike against it, of course, but it labours beneath several other strikes! Anyway, I’ll get to that, but first, ha ha, you’re probably wondering about the plot!
Well it goes like this! Chevy Chase, well known from Vacation and Caddyshack and Funny Farm and Fletch, plays a writer working on a book in his oceanside aerie! A knock on the door reveals two burglars, who kidnap Chevy and make him rob a bank! Ha ha, when the job is done and Chase is properly framed for it, the robbers kick him out of the car and he rolls down a giant sand dune, now an unwilling and innocent fugitive of justice! Hoping for sanctuary, his head full of lingonberries, he makes his way to the home of his ex-wife Goldie Hawn, whom we’re all familiar with from The Sugarland Express and Protocol! She plays a soft touch defense lawyer whose house is filled with clients to whom she’s offered employment, and also a roving band of dogs! Ha ha!
It’s also filled with Charles Grodin, from Clifford and It’s My Turn, playing her new husband, an easily-stressed D.A. from whom Chase’s presence must be kept a secret! Ha ha, it's the Ralph Bellamy part, more or less! A critical dinner party with the governor looms, naturally, and much screwball farce ensues! But not that much, really - maybe my expectations were out of whack, but once I realized that a very large chunk of the picture would involve barely-comic arguments between Hawn and Grodin, with Chase doing his best to keep out of sight, I found the pace of the movie lagging and the laugh count diminishing!
Because as talented as Grodin and Hawn are, and they are extremely talented, any minor uproariousness in this picture comes from Chase, whose dry delivery works like gangbusters! Maybe more of it would have been too much, but, ha ha, I guess we’ll never know, will we! At least the supporting roles are filled with familiar faces: Robert Guillaume from Death Warrant is Grodin’s co-worker; Harold Gould, well known from The Man From Planet X, plays the judge; George Grizzard from Bachelor Party is the governor; and T.K. Carter from The Thing plays Hawn’s wine-loving kleptomaniac houseboy!
The picture starts with reasonable pep, but it lacks stick-to-itiveness, and the sitcom-style direction doesn’t help matters! Still, it’s sprinkled with laffs, and there are little pleasures throughout, and if you're fond of dogs, there are plenty of those here too! (Ha ha, I hope Grodin liked the St. Bernard, because he’d be getting well-acquainted with that breed in the years to come!) I give Seems Like Old Times two nights I thought they’d tear my back apart!
Posted by Burl at 16:09