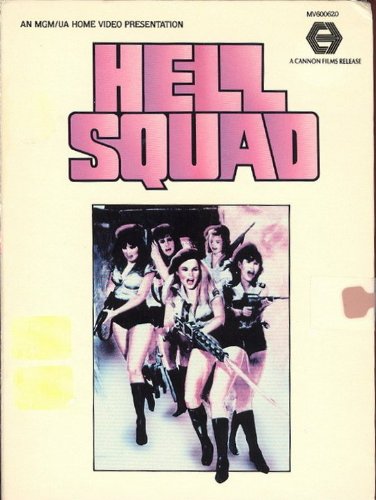 Budda-budda-budda it’s Burl, here to review one of the many commando girl movies they made in the 70s and 80s! You’ve got The Muthers, Commando Girls, Cover Girl Models, your Andy Sidaris epics, and then this one, among the liveliest and most goofy of the bunch, Hell Squad! (It’s commonly referred to as a 1986 picture, but the copyright date on it is 1984, which makes more sense! Ha ha, it looks like it came from 1974, frankly!)
It begins, of course, with a nuclear explosion, and then we see two scientists in hazmat suits looking over a bunch of empty animal shackles and marveling at the horses, cows and elephants that have been atomized with their special new Super-Neutron bomb! Somewhere in the Middle East, the son of a mustachioed American diplomat complains about the shaky ethics of a bomb that will dissolve livestock and people, but leave buildings standing and papers un-singed!
Well, soon enough the ambassador’s son is kidnapped by the sort of Arabs you used to see on the Carol Burnett show! Ha ha! But the ambassador’s assistant (“And I’m also your friend,” says he) comes up with a plan: take a Las Vegas kickline, spend ten days training them them as commandos, then simply have them rescue the ambassador’s son! Ha ha, it’s a devilishly elegant scheme! The boss of the showgirl army, Jan, accepts the assignment, but warns her girls that to successfully complete the job “it’ll take more than some T&A - it’ll be tough and dangerous!”
After some training, in which the girls scoot through a tunnel, jump a little pond and climb a plywood wall, the movie then settles into a series of scenes in which they alternate between taking group baths and slaughtering random gangs of Arabic peoples, based on anonymous phone calls they receive in their luxurious hotel room! They themselves get kidnapped, but escape and make it back to their room for another bubble bath!
Ha ha, this picture is full of crazy stuff, just enough to qualify it as a Ridiculous Action movie! We see the generic Arabs at leisure, speaking to each other in all-caps subtitles: HERE IS A NEW JOKE: WHAT DID THE ELEPHANT SAY TO THE NAKED MAN? Ha ha! The diplomat loses his mustache halfway through, but this is never acknowledged! The ambassador’s son’s only company in his dungeon is a dead Ponk-boy chained to the wall - a Ponk-boy who also appeared in Hide and Go Shriek! And the Scooby-Doo twist at the end involves a rubberized mask and a lot of retroactive questions vis-à-vis the never-ending stream of bubble baths all the girls took together!
It’s a cheerfully goofy picture, with the girls untroubled by all the human lives they take, and only mildly troubled when they learn that most of the people they killed were perfectly innocent! Ha ha, why worry when there are bubble baths to take! It’s a dumb movie, dumb as a box of dead crabs, and could maybe use a little more pep here and there, but for the most part it’ll entertain you while it’s on! Ha ha, I give Hell Squad two atomized horses!
Posted by Burl at 16:35